Last week I found myself in the lucky position of joining seven other wine lovers at The Square for a great lunch hosted my "Newcastle". There were several of the "usual clan" there and few others I had not met but certainly knew of, in a good way that is!! 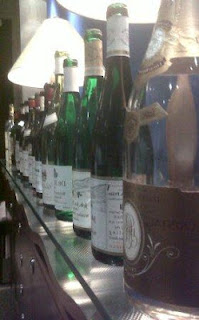 To kick things off with the canapés it was a magnum of Cristal 1989, this was richly intense and had some really biscuity aromas, not yet nutty and with a good length, no obvious signs of age, a fresh and long finish. 1989 is a strange vintage for Champagne...this was very good and yet there is no 1989 Salon and there was no Dom Perignon, anybody know why?

Once "Halifax" had finally arrived by what must have been stagecoach it was time for three different wines from the very same German vineyard - Wehlener Sonnenuhr - now this is the sort of thing I love. All three were served with a salad of spring vegetables with truffle cream and berkswell. First up was 2002 Wehlener Sonnenuhr Riesling Kabinett, JJ Prüm, fresh not over light, perfect aperitif, a level of ripeness I love, perfect now or in 10-15 years. At the other end of the scale was the next wine 1985 Wehlener Sonnenuhr Auslese GK (Long Goldkap too!!), JJ Prüm. This was staggeringly good, marmalade richness but with real vivacity and life, unctuous and heavenly. The third wine was served blind, it turned out to be 1983 Wehlener Sonnenuhr Spatlese, Dr Loosen. I was happy to get Mosel and happy to get Spatlese but less impressed to say 2004!! The colour (how many times do I say to myself "ignore colour"!!) was so pale and the nose a little muted. An amazing wine, though not as expressive as the Prums.

Next up was a magnum of white Burgundy served blind with a seriously delicious Lasagne of Dorset Crab with a cappuccino of shellfish and Champagne foam. We all had a go at guessing what it was, knowing who it had been brought by helped. We were fairly happy that it was 80's or 90's but what? It turned out to be 1984 (awful vintage) Chablis Grand Cru Vaudesir, Louis Michel. Once revealed you could see the un-oaked, oyster shell minerality. It just shows that wines in magnum and well stored can confound anyone...I really enjoyed it.

We were now into red Burgundy country and there were four of them to go with sauté of Somerset snails with creamed potato, roasting juices and morels. The first two were "direct competitors" - Romanée Saint Vivant 2001, DRC & Romanée Saint Vivant 2001, Domaine Jean-Jacques Confuron. The former on reflection and by agreement did shine the brighter but the Conforun was impressive, very expressive on the nose with delicate red fruit as well as darker weighty character it was only on the finish that it had a dash of slightly unpolished tannin, just a little hard, would be fascinating to try again in three or more years. The DRC RSV was just a little more intense and fruited and had a seamless structure. The other two wines were Echézeaux 1988, DRC & La Tâche 1969, DRC. The Echezeaux was at a lovely stage, real complexity, still good fruit but definitely at the middle stage of development, gamey notes were there and it was just pure pleasure. The La Tache had been bought from a hotel cellar for a small (relatively) amount of money so nobody quite knew what to expect. The colour was "browned off" but the wine was very bright and clear. There was a certain amount of decay about the nose but it wasn't until someone said beetroot that you realised this was exactly the aroma. It was perfectly drinkable, I enjoyed it, but it as not what it might have been, fascinating though.
The next course was Nebbiolo, three wines - Barolo Cascina Francia 1990 & Monfortino Riserva 1997 both from Giacomo Conterno & Barolo Riserva 1958 Borgogno
with a cracking breast of Pigeon & Risotto of Morels. Now, if you have ever read this blog you will know this is right up my street. The 1990 I have had once before and is stunning, so drinkable just what 1990 Barolo is about, savoury but no too much so. The Monfortino 1997 I have only had from magnum before. This was open and really lovely, it is quite high-toned and has classical Barolo notes but is a bit more forward an expressive than you would expect of a Monfortino at "only" 15 years of age, a treat. The Borgogno 1958 I found fascinating, I have a had a few old Baroli now and often this character appears..it is a Frazzle (the bacon fries/crisps) like aroma and with a milky acidity, I love it but it is not for everyone, the colour was a milky brick colour, it was very much alive, not sour at all, a great trio and awesome Risotto.

With roast rib of White Park beef we had the Bordeaux, they were Château Latour 1959, Château Palmer 1998, Château Batailley 1961 & Château Haut Brion 1975. It was a cracking foursome as they all had something individual going for them. The Latour was just so Latour and so much the classical Pauillac, I have never had it before and it showed real grace, not faded one bit, a triumph. The Palmer was slightly the odd one out due to its youth but had a plummy freshness and a future ahead of it, hard to evaluate amongst such mature wines but impressive. Batailley was the surprise package with real character, good richness and not outclassed at all. The Haut Brion was a wine I had not had before and being my birth year was very exciting. The merlot in '75 was definitely the greater of the main grapes in Bordeaux and whilst people think of Haut Brion as being "left bank" it is known for it's high merlot content making this a gem. There was all the usual character you expect from Haut Brion, dark fruit and smokey richness. 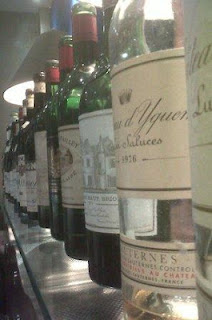 We then had a pair of Yquem's, 1976 & 1988 (magnum) with Crème Caramel with candied fruit, warm blood orange brioche roulade. The two were wonderfully different. The 1976 had a richness and intensity that you don't often find in any Sauternes even Yquem. Slight rancio flavours and almost orange rind combination of richness but with a reserved sweetness, a wine of intensity and character. The 1988 was by contrast a floral and more delicate wine, all freshness and whilst it had the Yquem trademark it was very much a delicate Yquem. Really drinkable where the '76 had been a "sip and savour" this was "drink it and love it". It used to be a comparative bargain against the 1989 and 1990 but now seems to be priced where it should be...sadly. My experience of Yquem has grown massively over the last 18months or so and it is without doubt "the" Sauternes. I really hope that it remains (for back vintages at least) in a price range where wine lovers can, even if it is a massive treat, try the wine so they know what it is all about. The En primeur release prices of recent years have meant this may not be the case...a real shame.

And so we were on to the very last wine which came in the form of two halves of Beerenauslese Wehlener Sonnenuhr 1995, JJ Prum with cheese. It was great to get to taste yet another richness level and vintage from this great vineyard, Stupidly I don't seem to have written any notes but I was pleasantly surprised by the intensity of the richness. The colour was darker than the '85 Auslese GK above which I guess is logical. I manages to be intensely fruited and rich but still have a delicacy you associate with Riesling, really lovely...

And so lunch was done...I have had many of the best wines of my life in the last 12-18 months and specifically the last 4 weeks...a real privilege to drink these great bottles...
Posted by Will Hargrove at 01:08