A great array of de Vogue 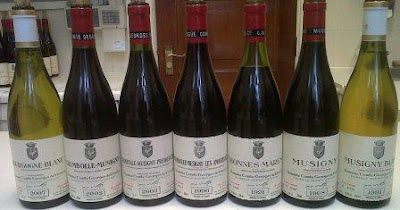 In mid-April I was very excited to go to a Domaine Comte Georges de Vogue diner that we (Corney & Barrow, so watch out for professional bias) hosted at the Saddlers' Hall, London. It is not a venue I knew before but is a good setting for 100 or so people, a nice atmosphere and an intimate enough feel. To get things going we had Delamotte Blanc de Blancs 2002, a Champagne I love but also a champagne that I personally feel will be all the more glorious in one or two years time and then for many years, anyway this was merely to whet the appetite.


After an introduction to the estate from Jean-Luc Pepin (Head of Sales & Marketing), who interestingly referred to the Domaine as "Vogue" not "de Vogue" as seems to be the UK way of doing things, we started the first wine. Bourgogne Blanc 2007, now much has been written about both the Domaine and this wine, but in brief it is de-classified Musigny Blanc Grand Cru as there is no appelation for white wines below the Grand Cru until you come to Bourgogne Blanc. If the same thing happened in red then Musigny would (and is, see next two wines) de-classified to Chambolle-Musigny 1er Cru. So why is this done? Well, essentially the last Musigny Blanc Grand Cru was 1993 and from then on, due to the need to re-plant large plots of the vines, it has been Bourgogne Blanc, it will according to Jean-Luc go back to Musigny Blanc in the next 5-10 years when they are satisfied with the vine age and that the wine is 100% worthy of Grand Cru status. This 2007, served with Seared King Scallops, showed really well (better than the 2005 that I had recently and is at a more awkward stage) with good acidity but richness in a butterscotch, almost smokey "savoury sweetness", if picking a fruit it is quite tropical and may be there is apricot there. What I like is that it has such unique personality. It will age for years, was taut now but very easily appreciated now.


The next two wines Chambolle-Musigny Villages 2002 & Chambolle-Musigny 1er Cru 2003, sound and appear like they ought to be similar but really couldn't be much more different. The Villages is from de-classified wines of all but the Musigny and includes Les Baudes & Les Fuees both of which are 1er Crus in their own right. The 1er Cru is exclusively young vines of the Musigny Grand Cru. But what makes these wines even more different that the different plots that they come from is the vintages. The 2002 is a very together wine with some development showing (several 2002's in my opinion are showing too much of this) a lovely blend of fruit but also the more savoury forest floor elements appearing. It is very lively but also due to it's balance just a wonderful drink now. The 1er Cru by contrast is richer, very primary in that it is densely fruited, it needs time, it is impressive more than charming at this stage, a little Rhonesque. It was 60% down in production in 2003 sure to the excessive weather patterns. So extreme that is was picked on August 23rd (very, very early). As a pair they were a great contrast, I would rather drink the 2002 but the 2003 is a wonder bottle to have in the cellar. Both wines worked well with the Brest of wood Pigeon on Puy Lentils. 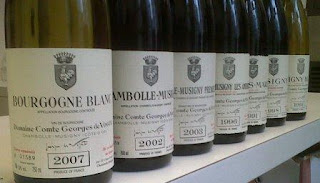 Even given the quality of what has gone before you can argue we now took a step up in quality as the next pair was Chambolle-Musigny 1er Cru Les Amoureuses 1996 & Bonnes-Mares Grand Cru 1991 with Chateaubriand of English Rose Veal. I think that much as people can argue over which 1er Cru could/would/should be promoted to Grand Cru there is a strong argument for the one vineyard that is a 1er Cru but that consistently makes wines that are, and sell at the prices of Grand Cru, it is Amoureuses. This 1996 which had two hours of decanting was on sparkling form. 1996 is not an easy vintage to show as it is a masculine vintage with considerable structure and overwhelming acidity that has hidden much of the fruit, until now it would seem. Indeed it is the first time Jean-Luc had thought it ready to show at a dinner and that is at 16 years of age. There was a perfect balance between fruit, development and structure and this showed immediately. After an hour in glass I felt the wine showed the structure again, if I owned it I would still plan to leave it at least four more years. It is however a complete wine and one of superb class. The Bonnes Mares was the most discussed wine of the night on my table and many others. There was, and this at 21 years of age is not surprise, quite a bit of bottle variation. The vintage was a hard one for Vogue, there was hail on 22nd August and the production was 50% down. A team of 60 people was hired to come in with tweezers (no optical sorting tables then!!) to select grape by grape. The bottle I had, showed earthy richness with an aroma of struck match. I enjoyed it for a more masculine style than the other wines on the night.

Then it was time for the last pair - Musigny Grand Cru Vieilles Vignes 1998 & Musigny Blanc Grand Cru 1991 - both were served with Welsh Rarebit (and a good one too). It may seem strange to serve a red and white at the same time but this worked. The Musigny was, if such an award is necessary, the wine of the night for me. Musigny manages to be both deeply almost broodingly intense but also feminine at the same time. 1998 was not an easy year, with a large selection required in August and a need to remove any dried berries. This wine will go on for years but is a joy now as well. The Musginy Blanc is an amazing wine, it would have been wrong to have it alongside the 2007 as it has such weight and intensity. It is one of those wines with developed aromas that make you expect sweetness but deliver dryness. The nose has that gunflint edge, a wine at it's peak now. On the palate there is almost a toasted tobacco aroma, it has freshness of fruit but that fruit is very tropical and intense. It is like no other white Burgundy, although the intensity does remind me of the mighty Montrachet.


What a great array of wines, six different plots were shown and six different vintages, it showed the Domaine in a glowing light and the scary thing is that as with many people in Burgundy I feel the wines they are making now are even better!! Exciting stuff...
Posted by Will Hargrove at 08:16