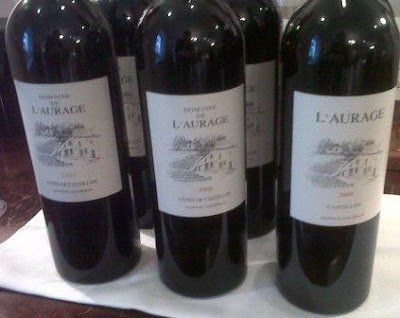 Had a quick tasting with Louis Mitjavile, son of Francois, last Thursday. Louis is a great guy, with a driven calm if that makes any sense. Having been involved in lots of projects in Bordeaux and heavily involved at both Roc de Cambes and Tertre-Roteboeuf he wanted his own "wine baby". He also did not want to clash with anywhere that he has "business" at the moment so Cotes de Castillon (as of 2009 Castillon, Cotes de Bordeaux) was a prime target. Louis managed this by finding a great estate just in the appellation but very near the St.Emilion border. His "new" wine, Domaine de L'Aurage (as of 09 just L'Aurage) was born. To my mind there are two key Mitjavile principles. Firstly, they harvest very late, it is all about the ripeness of the tannins, acidity is of no interest and ripe tannins with slighlty over ripe fruit is preferable to the opposite. Secondly, they never make second wines, they do a lot of work early on in the vineyard but never do a green harvest and it is either in the first wine or not...L'Aurage is 19hectares in all with 5600 plants per hectare the first wine was 2007 which we tasted on this day...

2007 - An early vintage. July and August were not so good, low sun overall and low heat too, harvesting was 4th & 5th October. The wine saw 75% new oak although as with all Mitjvile wines it is only in the texture that you ever get any sense of this. This wine has a lovely balance, it is medium of body with a richness but not heaviness, lovely now but will age well for 8-10years, for a 2007 it is mighty impressive and a cracking debut for the estate.

2008 - Louis declared his concern over the 2008 when he made it but he is happy now. The wine is a little atypical for Mitjavile, there is more of a classical Bordeaux grip to the wine, the fruit is redder than normal, I really like it. Louis refers to it as a vintage of no extremes. The wine saw 85% new oak.

2009 - This was down by 40% in production as they had hail, a real shame as the wine is stunning, not unique in 2009!! There is a brillaint combination of those two essentials, freshness and richness, it easily wears the 100% new oak without a hint of anything vulgar...a sign of what is to come. Louis was very positive about the 2010 but in a different way.

I'm happy to nail my colours to the mast here and say that this estate will follow, chase may be a better phrase, the Roc de Cambes and Tertre-Roteboeuf...
Posted by Will Hargrove at 05:42