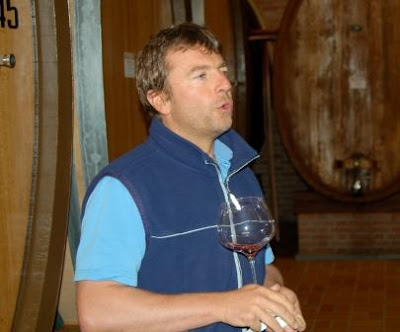 Having grabbed a quick breakfast in Monforte we headed just south out of the town to Cantina Giacomo Conterno to meet up with Roberto (pictured above) again, this time for the business of tasting the young wines as yet unreleased onto the market. You could feel the temperature change as we made it down to the immaculate cellars. We were very much in Roberto’s hands in terms of order of tasting – Barbera - Barolo – Barolo Monfortino. All the wines were tasted directly from barrel in the Burgundy glasses that Roberto likes most. It was a staggering tasting.
I have put my scores (in brackets out of 20) and rough drinking windows. These are not purely tasting notes, there are comments and observations thrown in too….

Barbera Cerretta 2009 (17.75-18.25) 2012 - 2015+
Harvested at the same time (22/23rd September) as the Barbera in Cascina Francia. A "very good year for Barbera, end of august was very hot when normally there are storms". Rich, deep with dark fruit. A hint of violet about the colour. A really fresh edge to the wine - Dark cherry, cassis and a touch of mint. Very pure and clean but with balance. Structured but still juicy. Up on intensity over the 2008.

Barbera Cascina Francia 2009 (18.25) 2014 - 2017+
Similar in overall colour to Cerretta but darker at the core and this followed through to the wine. A base, savoury nose with stones as well as real dark fruit. A chunky minerality but with definition. Fruit and real guts. No rawness. As Roberto commented "more salty than Cerretta". Serious wine

Barolo Cascina Francia 2007 (18.25 -18.75) 2014 - 2027+
Elegant light colour especially after the Barberas. There is no Monfortino in 2007 although 1 barrel was made as Monfortino and then blended in 2 years ago. The 2007 vintage was not so hot but followed a very dry winter when there was little or no snow, no ice and hardly any rain. The 2007 will not need as much aging as many Cascina Francia's (certainly less that the ultra-classical, very structured 2006 that preceded it) as there is a more immediate balance to the wine. We discussed racking with Roberto at this stage as he commented that this had been racked just 10 days ago. In the 1st year there is typically 3-4 rackings and then after that 1 racking every 1-2 years. I found the wine very impressive and also seductive a great wine to show those unfamiliar with Conterno's style of Barolo.

Nebbiolo di Barolo Cerretta 2009 (18.25) 2014 - 2023+
I have called it this as it is not yet decided whether this will be Barolo Cerretta or Langhe Nebbiolo as it was in 2008. If it is the later then it will be bottled after 3 years rather than the 2 years the 2008 had...if the former then it'll be bottled after 4 years as per Cascina Francia. Roberto says he is 70% decided it'll be Langhe Nebbiolo again in 2009 for a couple of reasons, firstly when tasted up against the Cascina Francia 2009 you can see why (though in isolation anybody else would release this as a Barolo). Secondly he is so pleased with the 2010 that he thinks it would be good to start “Barolo Cerretta” with a great vintage. We'll see what is decided. The wine was expectedly lighter than the CF 07, very defined strawberry (fraise de bois). Very, very elegant more depth than the Langhe Nebbiolo Cerretta 2008 that I had last night (trying to keep the trip going you see). I think this is a seriously interesting wine whatever it is released as. The very best thing is that Roberto has two such different "Crus" to work with. They complement each other perfectly.

Barolo Cascina Francia 2009 (18.75 - 19) 2018 - 2032+
Very, very fine, Elegance but also "grit and grip". Seriously good combination of richness and savoury minerality, you can now see why Roberto thinks Langhe Nebbiolo for the 2009 Cerretta wine when compared to this, it is very impressive.

Barolo Cascina Francia 2008 (17.75 -18.25) 2015 - 2030+
More degraded fruit character, a touch of mocha, there it is a maturity about the way this wine is. Roberto commented he could see a common thread with the 1971 we had had the previous night. He felt it will need 5-6 years in bottle to come together. I liked this and also loved the sense that had built up of the Cascina Francia showing the different years so well, there was a similarity but a very definite vintage variation. Just as there should be…

We then moved on to taste the Monfortino...three vintages in the order 2005 - 2004 - 2006. I ask a few questions on Monfortino generally. The wine is not a set parcel but often comes from the same area. Cascina Francia was bought in 1974, Since 1978 the Monfortino has always come from only the Cascina Francia vineyard (as had all the Giacomo Conterno wines until the Cerretta vineyard was bought in 2008). The only "decided upcoming non-Monfortino" year is 2007 as it did not stand out enough, this is quite controversial as the vintage is being lauded as a good one. A Monfortino is always "made' and then blended in if not selected to be released on its own. The typical aging for Monfortino is 7 years although this can vary, it was 8years in 2002 and may be the same in 2006, see below. The freak year of 2002 where there was a Monfortino but no Cascina Francia was due to the vineyard missing hail - and having seen how steep Cascina Francia is, the rain runs off it anyway - and being in Roberto's words "all exceptional" when he made this comment to his father he said "Simple only Monfortino"...a brave move as with the choice of not making 2007 Monfortino. Roberto is here to do what is right not necessarily what is expected. The Monfortino is always labelled on the front as Cascina Francia but on the back of the giant Botti it has a Monfortino label...a nice little "hidden" touch (see below). 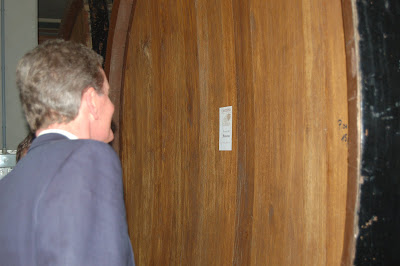 Monfortino 2005 (18.75-19.25) 2015 - 2035+
Wonderful degraded fruit but also a savoury “bovril-ness”, a good acidity. Very very fine. It is a “straight down the middle” Monfortino. Very balanced I think this will shut down less than most. There is another level of complexity. Tasted blind I am not sure what vintage would have guessed at. Really impressive. I can’t help feeling 2005 is an underrated vintage as it has come amongst 2004,2006 & 2007.

Monfortino 2004 (19.75-20) 2014 - 2040+
The most anticipated wine of the trip as the ingredients are there for a potential legend, this makes it exciting but also nerve-wracking. I have never scored a wine 20 but I think this is the closest to perfection I have tasted hence the score. There is nothing I would change about the wine. I initially wrote, light depth. This is because there is so much there but at the same time it is so fresh. The precision is immense, roses, violets, strawberries but also that classic tar and savoury edge. It just got better and better and there was no way I was going to spit it out. Amazing balance of freshness and depth...in a word BRILLIANT.

Monfortino 2006 (19.25) 2018-2038++
I am a big fan of 2006's as I think they are what Barolo is all about, you can argue 2004 is the perfect vintage and you're probably right but I would rather a 2006 style Barolo than an easy fleshy (2000?) style any day. Roberto was spot on to show this last as it is a big chap on the finish. It has that degraded maturity of fruit on the nose and is a harder but totally in-check version of the 2005. Roberto says he may well give this 8 yrs in Botti rather than Monfortino's standard 7. This is one of the treasures of traditional Barolo - longer in very large Botti/barrel means more elegance and a chance for the wine to meld together and soften an fraction. In the world of new oak wines where the oak adds structure here the very old (50-55yrs in places) wood allows the wine to mellow and breathe. A deeply impressive wine that in 30 yrs time will be fascinating "up against" the 2004.

2010 - Very late harvest, lots of tannin which meant you had to harvest very very late to make sure you had the fruit (and tannin) ripeness to go with the tannic structure - Classical like 2006 but may be even better.

After this we headed to the Vineyards…more of which tomorrow…
Posted by Will Hargrove at 02:52