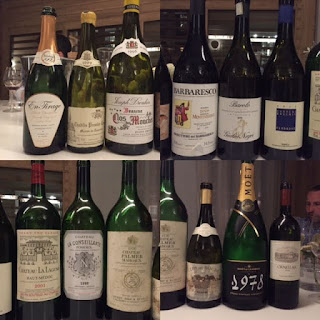 A rather splendid email arrived from Gary Birchtree (not his real name!) suggesting a dinner in the private room of Philip Howard's new restaurant Elystan Street on opening night. It was not a hard invite to accept. I have loved The Square (where he is now not involved) and Kitchen W8 (where he still is). The rest of the crowd was wine trade friends. The only disturbing part of the evening was discovering that I was the second oldest, only Mr Sherwood keeping be from the ultimate seniority. 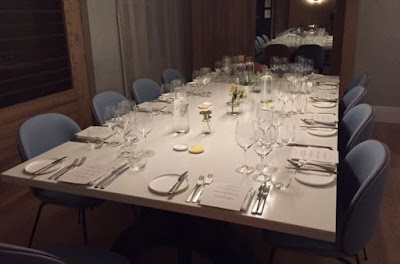 So we gathered, after a ten-minute stroll from Sloane Square tube for me, in the private room and were "treated" to 1992 En Tirage Extra Brut Russian River Valley Sparkling Wine. Our organiser who had sent this did two things one good (for him) and one bad. The good thing was that he arrived late having sent the wine on, the bad thing was sending three bottles. One would have been enough. An enticing nose but a dead palate, may be unfair in this company but probably better a while ago. Certainly not in the same league as the other "sparkler" later. 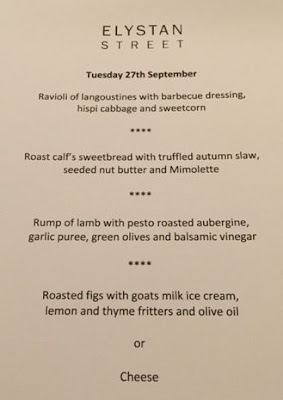 This was an evening about: Food, venue, company and wine. So to cover off the food it was all superb! There was no dish I would not have wanted more of (greed) or would not happily order again many times. The menu is below.

It was time now for a flight of whites. The first and last of which were from (two) bottle(s) the Drouhin being a magnum. The Chablis 1er Cru Montee de Tonnerre 1999, F.Raveneau bottles were both good ones, the first possibly just edging it for energy. Wax and lanolin with a very "proper" Chablis nose, a little of that dry-honey character. Mature on the plate but still with good vibrancy, a cracking wine in a good place. Beaune Clos des Mouches 1996, Drouhin was an imposing magnum and one might say a brave one. There was a dash of coffee on the nose, this was broad but not loose, I'd have been in Meursault if blind I think. Mature and with a decadent texture, nice wine. We then switched to the Loire with Pur sang 2011, Dagueneau. I don't know the Dagueneau wines all that well but have enjoyed what I have tried. This was expressive, quite broad and open, a little tropical but with enough of the nettle character though not sharp nettles, warm ones if that makes any sense. It was a splendid trio all in all.
Interestingly we were not "packing any Pinot" on this occasion so we moved straight to Nebbiolo with an intriguing trio, three different sites and three different vintages all in magnum. Young Nebbiolo is something people should not, in my opinion, miss out on. Barbaresco Montestefano 2008 from Produttori del Barbaresco kicked us off. This had a more open and more warm vintage feel that I expected. It was very easy to enjoy from this underestimated vintage. These are such good wines. Barolo La Tartufaia 2010 from Giulia Negri was up next, a blend of Nebbiolo from two crus - Serradenari and Brunate - showing a good degraded fruit and easy drinkability even now though it will age very well. Barolo Cannubi Boschis 2011 from Sandrone completed the Piedmont trio. There is a tar and texture feel to this, it has a tiny hint of toffee from wood but is ultimately both rich and balanced. Good spices too, a wine with a broad drinking window, as could be said for all these.
It was Bordeaux next and a good threesome. La Lagune 2001 got us started and I have to say La Lagune isn't necessarily an estate that I get excited about, have they made some lovely wines? yes definitely but I mentally file it under "dependable" rather than "exciting". This 2001, in magnum as were the wines that followed, was delicious and certainly exciting. Lifted with a good bit of sappy liveliness and then a driven and energetic, almost red fruited palate...simply lovely. The La Conseillante 1999 was darker fruited and from a clearly less great vintage, it was good and very true to the house but just a little muddied in comparison to the La Lagune. Tasted and drunk on its own it'd be splendid. The most different of the Bordeaux was Palmer 1976 (a BBR bottling). A very hot vintage, think 2003 but without the heat spikes just consistently hot and dry. The nose had a citrus element, sweet and tarry, mellow in tannin, gently moreish. A wine it was terrific to try and a good drink too. 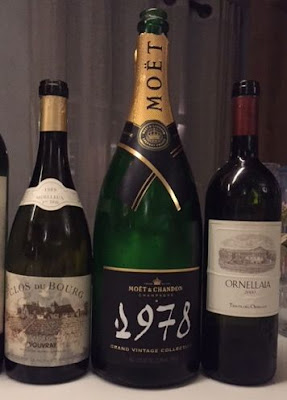 As we moved towards pudding or cheese we had an eclectic last flight. Two bottles of Clos de Bourg 1989 Moelleux 1er Trie from Huet had that lovely combination of zesty acidity and generous sweetness...a sweet wine I could certainly just drink alone and as an aperitif or with food (both pudding and/or cheese). Zippy apples and a dash of honey. Then Champagne - Moet & Chandon 1978 “Grand Vintage Collection“ (Disgorged 2004) - which reminded me of dry honey and a rancio character with good energy, a little of that "late-disgorgement" cocoa character. A lovely toasty finish, a wine at its peak now I think, well to my style anyway. Champagne later in a meal is a good idea I think. I am not sure why a bottle of Ornellaia 2000 was opened but I am glad it was, quite savoury and bold, a little bit of Bovril, good darker fruits and enough acidity.

And that, as they say, was that...a thoroughly enjoyable evening and a lovely restaurant that I will certainly be returning too!! As for the company...well the wine trade remains a place for fun, often opinionated, folk...long may it continue.
Posted by Will Hargrove at 08:19