2009 & 2010 Burgundy Pairs – Zucca 29/10/15
I'm not quite sure how I missed this blog but I've only just realised that I didn't actually get my notes written up. This is a tasting that I will want to look back at so I think "better late that never" justifies this very tardy posting. Mr East was the kind organiser, for which many thanks, the dinner was a trade affair with one notable exception who arguably drinks better than the rest of the trade put together. The brief was simple; bring two bottles of the same wine, one from 2009 and one from 2010.

For a better write up (with the wines fresh in his mind) have a look at the post by my friend Joss on his blog. The location was Zucca and for me it followed a rather liquid lunch, also a Zucca (I did get back to my desk in between), so my notes are not quite as "robust" as they might be. Plenty has been written about the growing seasons and the perceived styles of wines from 2009 and 2010 so it was interesting to get to taste things side by side.

We started with a Gosset Celebris 2002 from magnum. I have always liked Gosset as a house finding the style to be a good middle ground between the finesse and focus of the Blanc de Blancs houses and the more generous, biscuity style of the Pinot noir orientated producers. This though is 2002 and in magnum, it has a long way to go, briney and almost Chablis like this is moreish and all the better for it. Even in bottle it'll repay another 3-5 years.

We were then into the meat and drink of the evening, whites then reds. First wine was:

Meursault Poruzots 1er Cru, Maison Deux Montille - the 2009 I noted this as generous, slightly degraded with a lush open texture, enjoyable if not massively complex. The 2010 was, as you might expect, steelier, more saline, minerality to the fore. Good texture. "Tonight" I might drink the 2009 half the time but I'd want to own the 2010.

Meursault Genevrieres 1er Cru from Boisson-Vadot - was up next. I am lucky enough to be getting more and more exposure to the wines from this producer, almost always in company with many of the friends at this table which tells it's own tale. The reputation is of being an aspiring "School of Coche" style. The 2009 is a wine with nuttiness, a waxy generous texture whilst being big and pretty bold. It is also kept in a framework that makes it complete enough. The 2010 was pretty spot on it has to be said, driven but not so tight as to miss the point of being Meursault...really enjoyable, a quality wine. It was definitely a harder wine to write a note on which I often take as a positive.

Meursault Genevrieres 1er Cru, Coche-Dury - To follow Boisson-Vadot with the very "same" wines from Coche is quite a treat. There was a contrast though which was thought provoking and pattern-breaking. The 2009 in this pairing was better than the 2010. Now there was some questionning of the quality of the 2010 bottle but on the grounds that it was not corked and not oxized I feel that (for now, though god only knows if/when I'll ever have it again) I shouldn't just say "not valid". The 2009 was great, open but with good focus, reduced and with that lovely (if you like it as I do) whiff of gunpowder and struck match. There is a school of thought that with Coche being an early picker he over performs the perception of vintages that are often described as "warm" or even "hot". He certainly seems to have nailed 2005, not that this is news to anyone. The 2010 was too limey, too steely, then a little dry and ultimately had a slight dry toffee note...I just concluded "odd, odd, odd". So rather than worry about the 2010 I think it is worth noting the 2009 is exceptional and that to dismiss 2009 as a possibly sub par white wine vintage vintage is dangerous, generalisations alwasy are, especially in Burgundy.

That concluded the whites, there were a few pairs I had been tempted to take and will continue to look at whites from 2009 and 2010. My thoughts on 2009 and 2010 whites from this and other tastings are that the styles of the wines made in these years are more different than the pure quality assessment. In 10 years time would a tasting see 2010 hailed as better? Yes I think so BUT 2010 will always come with more expectation and sadly, human nature to blame here, more disappointments. For the next 2-5 years I would just serve 2009 whites cooler and undecanted, whereas 2010's I would decant and let breathe. If you don't put too much though into it there is a lot of fun to be had with 2009.
The reds:
Volnay Champans 1er Cru, Lafon - I do not have that much experience with Lafon, an iconic producer, and was enthused to taste. I think I came out of this pair with more questions than answers. The main problems is that I love the Pinot-ness of Volnay. I would argue that actually if you look for the essence of Pinot then Volnay is the place to go, not to say it is my favourite village in Burgundy for reds but it one that far too many people overlook (to digress a little it is like people buying Barolo and ignoring Barbaresco). The 2009 was a wine I would never has called as Pinot let alone Burgundy. Minty, rich, savoury, with high acidity, this was more Brunello-like than anything. I would love to try this as an older wine. I have a feeling, more a gut feel, that it may get to "mature" status quickly but then actually mellow nicely. The 2010 had the same weight but more focus, still a shade crude for me and certainly a wine with a frame that would suit Gevrey rather than Volnay.

Volnay Champans 1er Cru from d’Angerville - Bias aside this is more the Volnay I know. The 2009 smacked of a wine made to be deliberately toned down. You might expect the warmer 2009 vintage to produce a bigger wine but with this as a pair the 2010 had the slightly darker fruit and the 2009 was redder, glossier, may be more feminine. The 2010 is, for me, comfortably the greater wine here. Refined and long with lovely focus and minerality, this is persistent and impresive.

Ruchottes-Chambertin Grand Cru, Rousseau - We had a few issues in voting on the next two pairs - a good "1st world problem". I was slightly out on my own in preferring the 2009, slightly as a means of being contrary but I think I just preferred it. The 2009 so enjoyable to drink right now, ripe but correctly so, a lovely salinity to this and just a delicious meld of red and black fruit. The 2010 had an element of star anise and some spice, this was a shade darker of fruit. A stunning pair and one that proves that quality producers do their stuff every year. 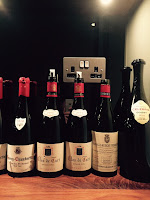 Gevrey-Chambertin Clos St Jacques 1er Cru by Fourrier - I'd love to try more Fourrier. The 2009 was a little like Burgundy on steroids which I think is how a few people perceive the vintage and if there is balance this is not an issue. There is density to this and a certain boldness too. The 2010 is lovely real Grand Cru stuff, the structure of dark fruit with the freshness of red fruit...pretty smart!

Clos de Tart Grand Cru - This wasn't long after Clos de Tart day that I wrote up. I agree with Joss' comments that these might have shown better earlier in the flights. The development over the course of Sylvain Pitiot's time at Clos de Tart has been towards purity and elegance over power. This bottle of 2009 I didn't think was showing quite as well as some but was still decent. The 2010 I think is a very very fine bottle with freshness and more red ruit than you might expect as well a little spice. A wine I really look forward to following over the next few decades.

My conclusions on the reds are not that different from the whites. Burgundy as ever is all about the producer and their interpretation of the vintage. If you bought 2009's and 2010's from producers you like, you did the right thing.

I haven't mentioned the food, this was Zucca, so it was good. The chat was, as ever, as much fun as you make it. These dinners always act to remind me, in case I forget, what a fun trade it is that we all work in...well done all...there was chat of a 2009/2010 Bordeaux follow up...
Posted by Will Hargrove at 12:06