Irish goes into his 50th year

I am a few blogs behind at the moment but this one has jumped the queue so that I can write it up while things are fresh in my mind. The other reason is that it is Irish Pete's actual birthday today and the lunch that follows was to celebrate this a couple of days early. Irish is one of the select few with a nickname on this blog…I can't quite remember from where or when the name started but there we go, Halifax (aka Nobby) started it.

So an email came round 10 days ago, can you make a relaxed lunch at Kitchen W8? I was delighted to be able to say yes. Come the day we were 8 in total and a lovely line up had fallen into place. As an aside it now often seems easier to organise dinner 3-10 days in advance rather than with lots of notice.

The menu that Kitchen W8 put together, of 4 half main courses, was spot on and is listed below (with a few pics at the bottom). I must have been there four or five times now and will be actively looking for chances to go back, I think the food and service are both very well pitched, "relaxed attention to detail" may be. Sadly living North and working just south east of the city it is not as close as I'd like.

And so to the wines:

Salon 2002, ok I am biased but Salon is never a bad way to start any meal, the 2002 is a teenager at best but a perfectly mannered and promising one at that. Brisk with great freshness, Chablis-esque possibly but not sharp, very moreish with a dash of saline, lovely and with such a bright future.

Then as we sat down we had a pair of whites. Meursault 1er Cru Genevieres 2009 from A.Gambal and Chateau de Fonsalette Blanc 1997 from Rayas. The Meursult was exactly what you want of Meursault for drinking now, rich, opulent but with good warm minerality, really good length and a lovely rounded but not flabby texture, a very slight whiff or reduction essentially just a very good wine. The Fonsalette was a lovely contrast, more complex and academic for sure but not to such a degree that it was anything but delicious to drink. A little lanolin and chestnut, dry toffee and a burning butter as well a a long length and no lack of acidity, really rather splendid especially with the food. The wonderful contrast of the three whites already had me thinking this was a good tasting day. 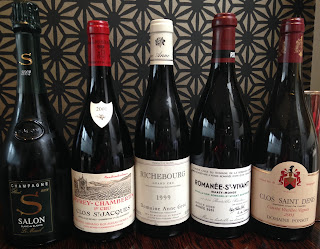 Volnay 1er Cru Clos des Ducs 2002 from d’Angerville was up next as we sort of served the reds in a staggered, one wine at a time, order which worked well. I know Clos des Ducs pretty well, in the main thanks to this exception tasting. The 2002 was showing very well, saline and tight with focussed red fruit and elegant persistence, serious with the drinking window just opening…really lovely, coiled tight. We now shifted both to the Cote de Nuits for the next 3 reds…some big names.

Clos St Denis Grand Cru 2001 from Ponsot was some how less precise, soupier possibly than the d'Angerville but that worked as a nice contrast. The less defined, slightly degraded nose gave way to a good, more generous palate and a certain lush decadence.

Gevrey-Chambertin 1er Cr Clos St Jacques 2001 from Rousseau had a nose of sweet fruited density with a dash of bovril just adding a savoury side which just shows this wine to be moving into the second phase of a long life. It was very precise, with fruits that are hard to describe, red fruit on a core of something darker possibly, long and just so dam drinkable. Yet another bottle of Rousseau that just makes you wonder how they do what they do.

Romanee Saint Vivant Grand Cru 2001 from DRC followed, it can be dangerous with DRC and Rousseau for a winner to appear and then the sum of the parts is less than the individual loveliness should make it. On this occasion both were singing. This RSV was superb, focussed and red with primary fruits but in no way one dimensional the nose is so packed with life, an exceptional bottle in every way. I think this will age with grace and balance rather than going through the phases that the Rousseau before it, I would be equally excited to own both. The RSV for its guile and finesse with a core underneath (think Philippe Sella), the Rousseau for its grit and savoury decadence whilst still being charming (Richie McCaw).

And so to the Rhone next. Hermitage 1991 from Chave was an absolute masterclass in how this producer belongs at the top of any table of wine estates. Rich yet weightless, a little armpit and grunt with a sweet fruited then saline palate the sombinationof elegance and almost light texture with much flavour was staggering. This was followed by Barbaresco Rabaja 2000 from Giacosa, 2000 being warm it was a better vintage in Barbaresco than Barolo due to the cooling effect of the river. It had a degraded, flattering nose of sweet bruised nebbiolo fruit that made it easy to enjoy and decadent. Just a lovely wine for right now.

Then after the diversion from Burgundy to Rhone and Piedmont we were back with a cracking pair of 1999's both of which had been decanted:

Richebourg Grand Cru 1999 from Anne Gros was very good, a rich fruited nose of mulled, almost Christmas, fruits, this had a darker more powerful side to it, a wine that shows massive promise. There is a balance about it that makes it appreciably enjoyable now, brooding is too crude a word but probably as close as I can get. 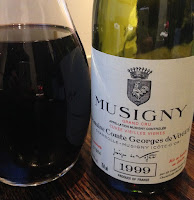 Musigny VV Grand Cru 1999 from de Vogue is a wine I know rather well and is also a wine that, when I last had it, was still firmly in a sulking phase. This was all about coiled minerality, saline, iron and a wonderful rich yet not heavy texture. I, sadly, had to taste rather than drink these last two (its not often work has to get in the way but sometimes), I can well imagine they both came out more and more in glass and strutted their stuff. From a tasting perspective they were just how I wanted them to be...

A splendid luncheon with a really good crowd of wine lovers, lots of good chats…at one point I overheard a good, if not directly relevant to this, quote about Martinis (or Negronis in my case)…"One martini is all right. Two are too many, and three are not enough." from James Thurber…too true.