Domaine Leflaive and Dominio de Pingus at The Cafe Royal... 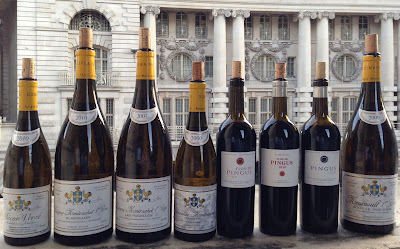 This is was a special dinner for a couple of reasons. It was a chance to welcome Brice de la Morandiere to London as head of Domaine Leflaive and at the same time a great chance to taste two iconic estates together in a complimentary fashion. The choice of venue was crucial and the team at The Cafe Royal did us proud. We had used the venue once before for a Gazin Dinner with Nicolas de Bailliencourt.

Through the evening Brice spoke very well and emotionally about Domaine Leflaive, about the loss of Anne-Claude Leflaive who was for so long the driving power behind this great estate. He interestingly observed that Biodynamics must be seen as a "means to an end" and not a "means in itself". When it was Peter's turn to speak he was thoughtful and modest, as ever, describing a little about how Pingus started and what he wants and hopes to continue achieving.

We had an aperitif of Mâcon Verzé 2010 to get proceedings off and running. Mâcon Verzé is a wine I know well but sadly, due to the really small 2012 and 2013 crops, do not get to drink as much as I'd like. This 2010 is steely and fresh, very youthful with little or no toastiness at all. Still a baby of a wine but deliciously moreish.

The first course was accompanied by a lovely pairing, both from magnum.Puligny Montrachet 1er cru Clavoillon 2010 and Puligny Montrachet 1er cru Les Pucelles 2007. The Clavoillon was really showing well. It is the Domaine's largest 1er Cru holding and almost a monopole. Brice described it as often being masculine, almost a "Meursault in Puligny-Montrachet". It had an expressive nose with a touch of reduction, it is youthful but lovely now, with good, but not dominant, acidity. The Pucelles as a vineyard was described by Brice as "Feminine" and needing some time to open up. The nose was lovely, oyster shell, oil, minerals, a lovely waxiness then on the palate there is a Grand Cru-like ripeness. Pretty special; richness of Cote D'or and the minerality of Grand Cru Chablis.
These two were followed with Chevalier-Montrachet Grand Cru 2000. This had developed into the next phase of life, also a reflection of a warmer more opulent vintage than the refined classicism of 2007 & 2010. The nose had a complex nutty side, a little less waxy. This is ready now in my opinion. There is a good decadence, almost a Toffee character.

Peter commented how both 2008 and 2010 were what he termed as Atlantic influenced vintages where there had been good rain in the preceding winter. Flor de Pingus comes from 28 hectares of vineyards and Pingus just 4 hectares. The Flor 2010 has good concentration, immediately shows itself to be a young wine. Mulberry and cool climate back fruits, tobacco and a little leather but vibrant and densely youthful, the wine saw only 30% new oak. Flor 2008 by contrast is a little more evolved, leather and tobacco show far more, there is an earthy degraded character. Then a lovely sweetness to the finish...this is good now although it will continue to develop, guaranteed by that lovely sweetness. It is a great pleasure to get to drink Pingus, the 2008 has what I scribbled down as "fresh depth", it manages to be both opulent and expressive but also taut and tight. It is a vast wine that will be best in 5-10 years and well beyond, exciting.

Rather than have, what we thought would be, the biggest wine of the night (Pingus 2008) with cheese why not use the cheese course as a good chance to have some more white and ideally from a warmer vintage like 2009. So we had Meursault Sous le Dos d'Ane 2009 from Magnum. This is spot on now, enough zip to counterbalance the yellow and almost tropical fruits of the vintage. It went well together, the textures being complimentary. In bottle I would drink the 2009 now, no pressure with mags but when it is decadent like this I say drink away.

An evening that managed to be both special, poignant and incredibly fun...
Posted by Will Hargrove at 09:30