Grouse and Richebourg - The Square

When an email appears from Jordi entitled "Grouse and Richebourg at The Square" one tends to pay attention. Fortunately the date worked well and the brief was as simple as it was exciting, turn up at 6.30 pm and bring a Richebourg. The birth of the evening was a meal a year earlier when we enjoyed some of the best Grouse either of us had experienced, it is covered in this post. 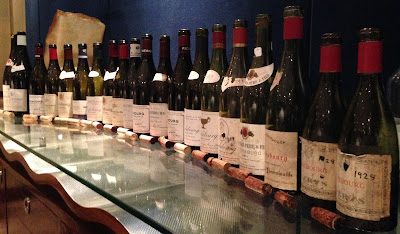 So fourteen eager dinners gathered. We started with a magnum of Champagne Chartogne-Taillet Cuvee Saint Anne NV, not a wine I knew but a good, balanced Champagne from a producer that a few of the crew knew. One to find out more about.

The first course arrived after the usual Square canapés (always excellent if not healthy!) Carpaccio of Sea Bass with Fennel Juice, Olive Oil and Orange was served with two white 2006's from magnum:

Chassagne-Montrachet 1er Cru Ruchottes 2006 from Ramonet (it is a site they describe as their "little Montrachet") and Chablis Grand Cru Les Clos 2006 from Dauvissat. I think it is fair to say that neither was that exciting. 2006 is a vintage in which the vast majority of whites lack precision and freshness to my mind. The Ramonet was nice as it hit the glass with a good refreshing edge coming from the cool temperature but the stem ginger and tiny amount of reduction (both positives in my book) quite quickly turned to a slightly flat toffee and a little looseness. I am being hyper-critical here. I love Ramonet and have had many spectacular bottles, some recently, from this great domaine. In short drink up 2006 whites. The Les Clos was a more complete wine and possibly fought the vintage a little more, wet stones and lots of minerality. I did not dislike either but we were now all looking forward to the main attraction.

We had wines from many of Richebourg's eleven owners. The site is one of the best known of Burgundy's Grand Crus, a "decent" size at 8.03ha and comprised of two "Lieu Dits" - "Les Richebourgs" and "Les Verroilles ou Richebourg". You can read more about Richebourg in many books/sites amongst the best sources being Jasper Morris, Clive Coates and maps from Sylvain Pitiot. 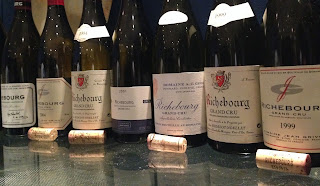 The next course - English Duck with Roasted Figs and Turnip - was to accompany the first flight of Richebourgs. It worked superbly.

Richebourg 2007, DRC - I have been luck to have all the DRC 2007's, up to La Tache, in the past year and I really think they show well. There is a brightness and a "verve" with them, energy comes to mind. There is good red fruit, not masses of depth, a little structure and a little graphite, I really like the precision. I will though, stand by what I said on the night, this is a lovely and very good wine but I am not sure that in the overall context it is a great Richebourg. It is more a superb 2007 than anything else. It was well received. If you own it drink a bottle it would be a shame to miss this "phase".

Richebourg 2004, Grivot - Much darker, more saturated, quite "stinky" in the way that Graves can be, quite farmyardy, not overly forced but just not balanced or charming. This wasn't well received generally, too much dryness, in many ways the opposite to the DRC. possibly trying to make too much from a tricky harvest.
Richebourg 2004, Hudelot-Noellat - Initially a little closed but then it opened out with a nice charming red fruited nose. In contrast to Grivot you get the impression that this wines has been allowed to "be itself". Balanced and pretty, one of the wines of the flight for almost everyone.

Richebourg 2001, Anne Gros - Tarry and richer, in many was more what I think of Richebourg being like. Primary, gutsy, quite obvious, though not harsh, grip. A wine needing time, someone said may be a 2008 if it were served blind and I agree. Patience required. I do not know the house style but those that did said it just needed patience. Impressive.

Richebourg 2000,  Anne Francois Gros - I thought, and my neighbour was polite enough to agree, this may have been the only wine in the first two Richebourg flights that was a "sub-par" bottle. There was a slightly bruised toffee-like note for me and after a nice saline dimension some "metal". I can well imagine a good bottle being very good. Opinion deferred.

Flight Summary - With the mix of vintages and two (2004 and 2007) being tricky ones I thought this told us more about the approach, and to an extent, style of the producers than Richebourg itself. Fascinating differences and to my mind, forgiving the bottle of AF Gros, only one weak link.

Roast Breast of Yorkshire Grouse with Crousillant of the Leg, Pickled Elderberries, Wild Heather and Smoked Bacon - was simply a brilliant, and satisfyingly generous, course. Really excellent. It deserved what turned out to be a great flight of wines.

Richebourg 1999, Hudelot-Noellat - Very pure, pretty, a little asian spice on the nose, long, nice grip, delightfully poised. At the end of the flight I added a note to say "slightly less Richebourg than the others?". I am note sure if that is right, it was lovely either way.

Richebourg 1999, Grivot - I liked the initial nose and wanted to like the plate to show the 2004 was just a "weak showing". Sadly, I found the palate simply too dry and a little over extracted, not black fruit over extraction just "tea bag left in too long" extracted. This did divide opinion and when we all had two votes for wine of the night at the end, this got a vote from possibly out most qualified palate, will the fruit win out? I hope so but I fear not.


Richebourg 1999, Anne Gros - This was rich, a little bit of soy showed on the nose and there was depth and spice on the palate to make this a sturdy and more masculine wine. Good.

Richebourg 1999, DRC - I love 1999's generally and have been incredibly lucky to drink a few DRC 1999's, in modern speak they appeared to have "nailed it" in '99. I am of course hideously biased. This and the Meo-Camuzet that followed were voted the wines of the night. This had stunning depth, poise, balance and managed to be both very young but also showed it's hand. I imagine it is only just opening up. My note just finished with the rather flippant "Proper Job". Pretty special.

Richebourg 1998, Meo-Camuzet - This contrasted the DRC brilliantly, this is in full stride, it's done it's warm up and is ready to perform. There is a lovely open, slightly grainy,  slightly degraded sweetness, lovely acidity too. All in all just a lovely wine to wallow in.

Richebourg 1998, Anne Francois Gros - This was good too. Nice to have two 1998's both showing well as I have found it to be a "hit and miss" vintage. There was a lightness of touch here, a feeling of easy completeness. Somehow understated and I don't remember it being discussed a great deal through no fault of it's own. Good.

Richebourg 1995, DRC - This was very balanced, very easy to enjoy, the nose was in it's second phase, not decaying but evolved. It was the glass I finished first, there didn't seem much to dwell on, a wine to enjoy for it's completeness if not for its excitement. I haven't found many red 1995's that are truly exciting, it seems a good vintage that struggles to do much beyond that. A lovely end to the flight all in all.

Flight Summary - This was as strong a flight of reds of this level in Burgundy as I have had. Two things struck me (and I think most others). Firstly, 1999 is a lovely vintage that is only just starting to hit it's stride now. Secondly, there was much more of a Richebourg personality to this flight, helped of course by the vintages being stronger. The personality is one of structured grace and a certain darker fruited lushness. Really special.

The cheese then ushered in the older wines!

Richebourg 1982, Gros Frere et Soeur - Was extraordinary in tasting quite so bizarre, very viscous and heavy, smelling of degraded leather but then with a palate that can only be described as bitter and pretty rank…I can't quite see what the fault was because it had not faded from oxidation, anyway everyone just moved on.


Richebourg 1978, Rodet - this I found to be light but balanced, not very remarkable but correct.

Richebourg 1971, Bouchard - I thought this had some of the sweetness you really want from Grand Cru at this age, I thought it was impressive if a little lacking in personality.

Richebourg 1964, Thevenin - This sadly was madeirised, a shame as I had heard good/interesting things.

Richebourg 1928 Avery's, Domaine Gros - Served from two half bottles, as you'd expect one was a little better than the other but both were good and to a degree rode to the rescue of this flight. It had sweetness and acidity and also persistence. They had, generously, come from Averys that very day. This wine was voted third in the vote at the end of the dinner with DRC '99 and Meo-Camuzet '98. 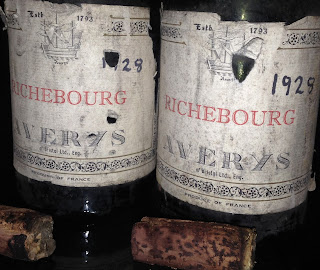 Conclusions - This dinner was a great evening for several reasons. Good organisation but not over-organisation, A really good crowd so conversation as a whole table worked as well as in groups. The food was brilliant and having four, logical, courses was the correct format. Service was good and not over fussy. In terms of the wines it was very informative. There was a feeling that with the wines the influence, as is often the case, went in the order; producer, vintage, terroir. With Richebourg being almost exclusively Domaine-made now the older wines of the future may be a little more dependable. I would just re-iterate how good the 1999-1995 flight was. 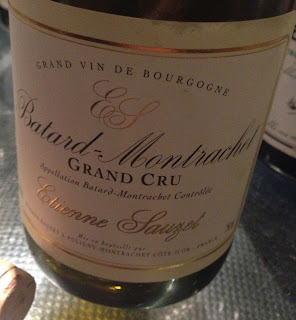 There was one more wine served up at the end - Batard-Montrachet Grand Cru 2004 from E.Sauzet - and rather delicious it was too. A feint whiff of reduction, then good freshness and a nice citrus freshness to go with the Grand Cru richness.

-
Thank you to all those who attended for their bottles, to the the Square for doing what they do so well and to Jordi for the organising as always! Onwards into Autumn...