So Joe and Valentina  co-ordinated everyone doing a team meal at Planet of the Grapes Bow Lane Restaurant…bring a bottle or buy a bottle was the order of the day and the format very relaxed. We kicked off with a few whites:


Bourgogne Aligote Raisins Dores 2010, Domaine Michel Lafarge - A wine I love, I've sadly finished my case of 2008, always more richness than you associate with this sometimes sour grape, the 201 was a little muted but good, best in another 12-18 months I recon, a nice start...

St.Veran Les Deux Moulin 2012, Louis Latour was next, dent with good minerality but just a shaw too much "safety first wine making" may be.

Meursault Les Grands Charrons 2009, Boisson-Vadot - Rich and slightly reduced as always here, the only thing that hinted at 2009 was the vey end of the finish, this is classy wine with good texture and a nice future, quite a treat.

L'Effronte Moelleux 2007, Domaine Matrot - Ok so there aren't many sweet aligotes out there, this wine is ageing well and has a great capacity for food matching, think if anything where you want youthful Sauternes like flavours but without the viscosity. 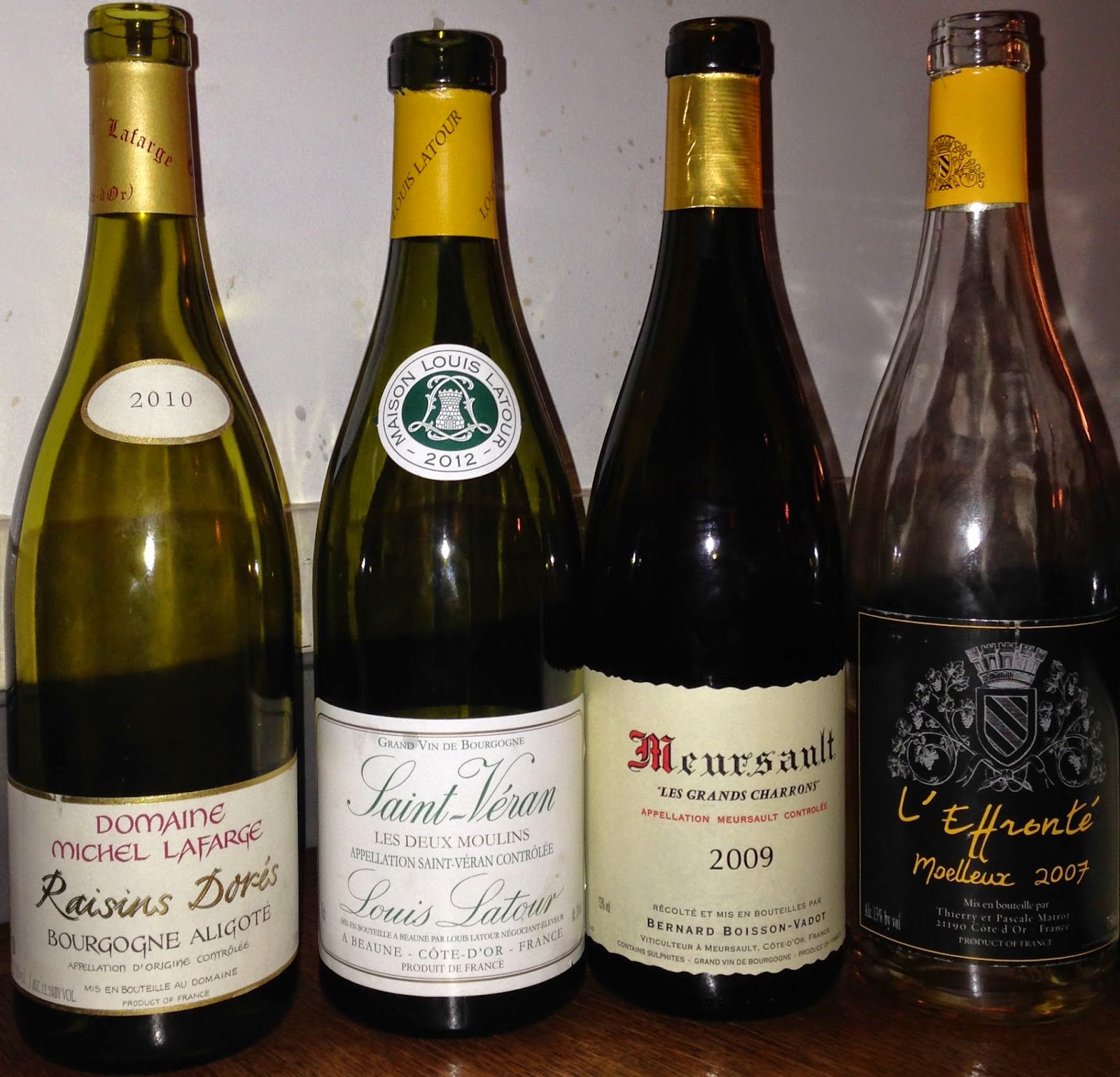 Gevrey-Chambertin 1er Cru Petit Chapelle 2011, Rossignol-Trapet was the first red and sadly we discarded it, I didn't think it was corked but it was almost metallic, interestingly we left it and the next day Matt at Planet of the Grapes said it was delicious and asked why we hadn't drunk it. Strange.

Volnay 1er Cru Taillpieds 2008, de Montille - this was very elegant, very volnay (red fruits and feminity), and also very 2008 by which i mean pure and focussed in an almost lean way, very cool pinot, a style I love but so different from 2009 for instance, good wine!

Then were off to Piedmont with Barolo La Tartufaia 2009, Giulia Negri which showed well though I am not sure 2009 is their type of vintage especially, I have been there since this meal so will do a blog about Negri soon - it's a very interesting estate. My two bottles were next.

Langhe Nebbiolo Cerretta 2008, Giacomo Conterno which is a one I know well, the first vintage from the site by Roberto (he only completed the purchase in June 2008) it is a very pure, slightly lighter, Nebbiolo expression - I really like it. The other of my choices was Barolo Pie Rupestris 2009, Cappellano as I wanted to try it for the first time, no disappointment here, rich and full but not heavy, this will age well and hopefully help me keep my hands off the 2008 and 2010. Class producer for sure. 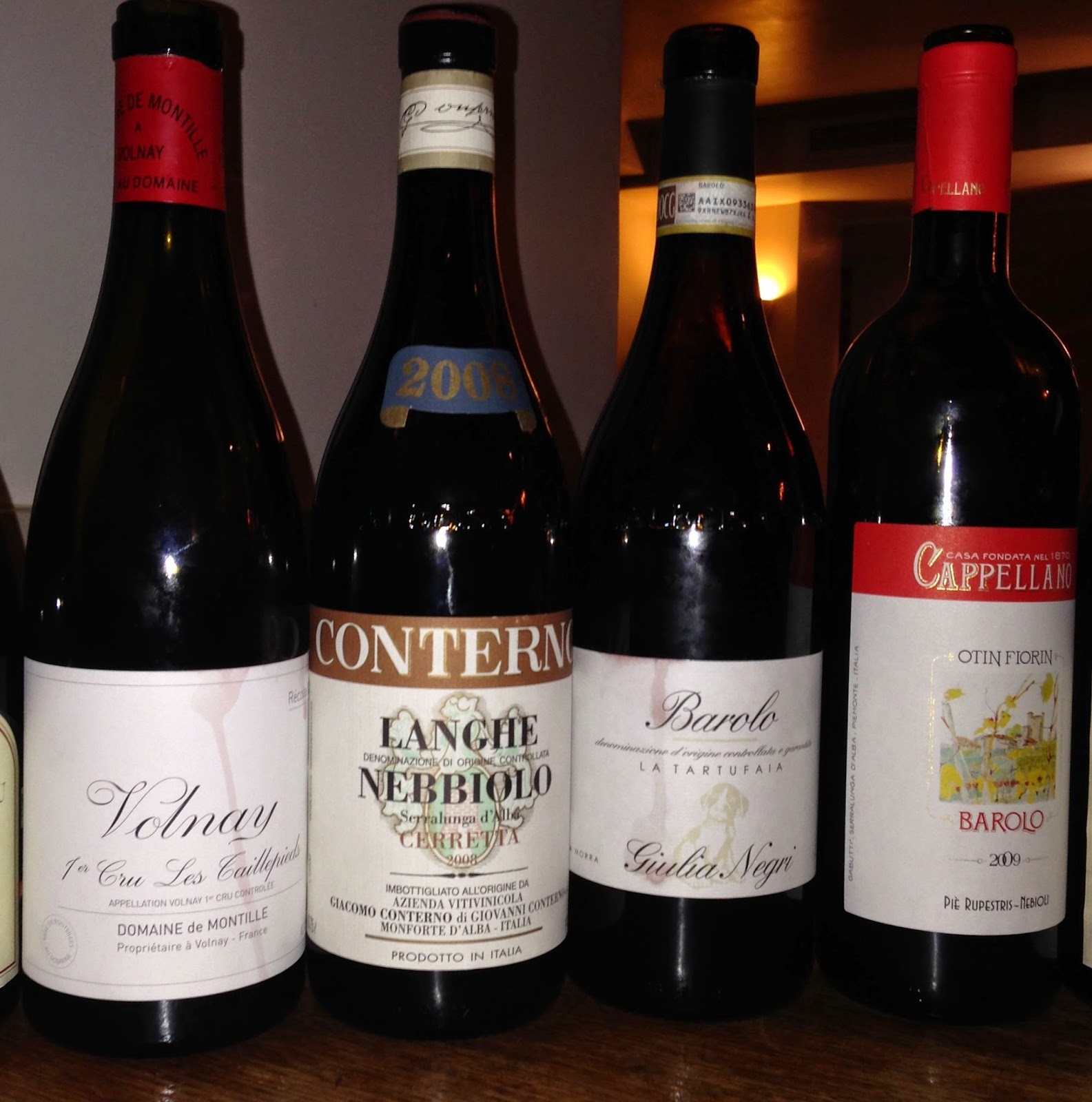 Coudoulet de Beaucastel Rouge 2009 kicked of a quick trip to the Rhone valley, a nee wine that is drinking now and remains a real value buy (in quite a serious bottle now also).

Chateauneuf-du-Pape Cuvee des Felix 2000, Domaine Bois de Boursan was a few people wine of th night and I could see why, real depth and power but not brutish, impressive.

Lovat Vineyard “Amarath” Syrah 2006 from Dry River was the slight intruder in the Rhone flight and had a good deep Syrah nose, black fruit and cool stones/iron...the only problem was a slightly hollow palate, the finish returned well though. 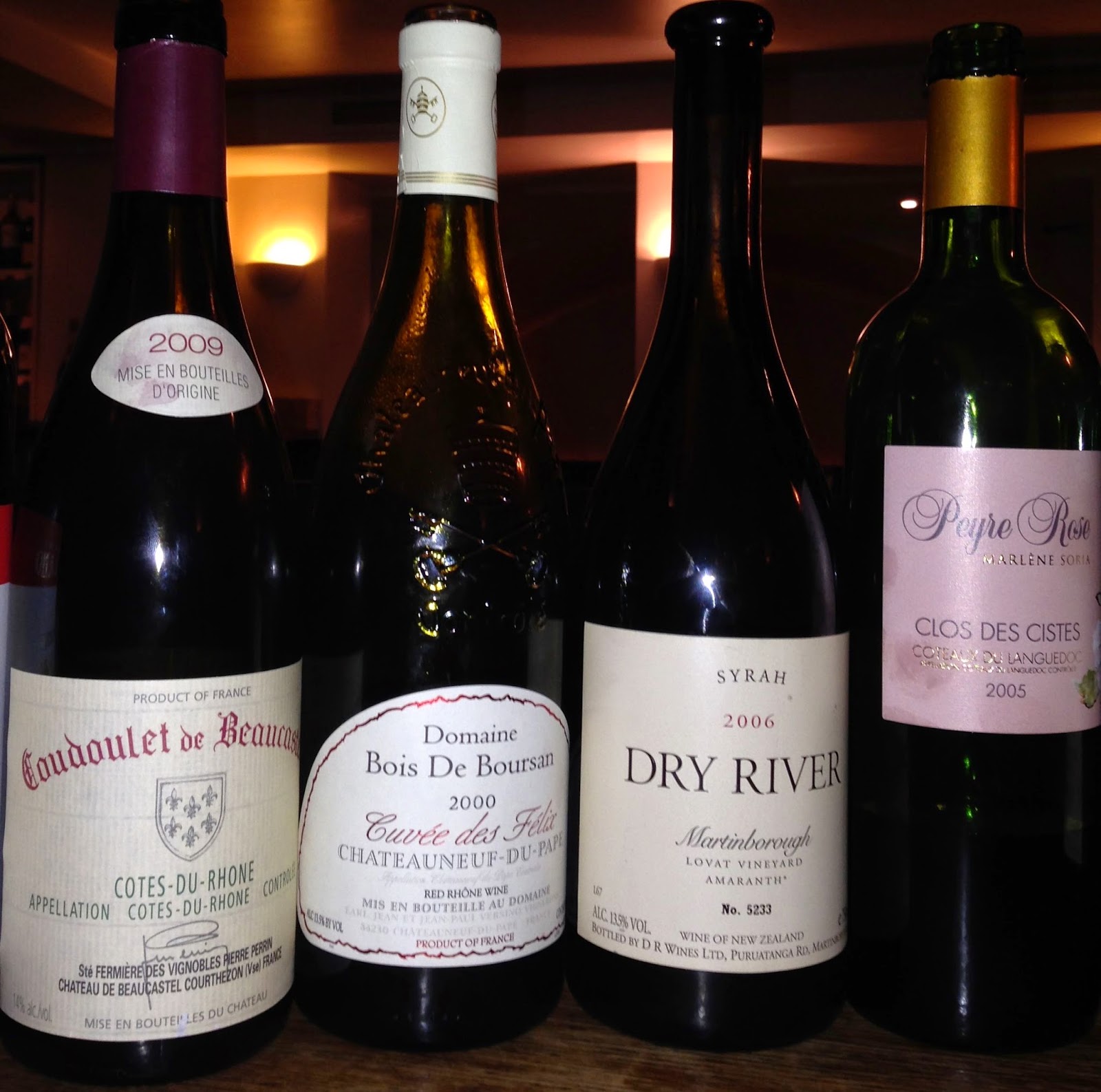 Things the became a little surreal…a cracking Langedoc wine that I had never had was next, good herbal fruit and an easy but present structure it was Peyre Rose 2005, Clos de Cistes, awful label but then that it what decanters are for. I'll look it out again at some stage.

Calon Segur 2000 was predicable good and try proper, fir and masculine but in no way harsh, good length, good fruit, sartingto hit it's stride, a treat.

Gérard Depardieu Référence 2012 a Vin de Pays d'oc was extraordinary in it cheap tasting primary, almost carbonic nose, fortunately it was someones second (I hope) joke bottle, we had a good discussion about it but sadly it took a little bit of a hammering... 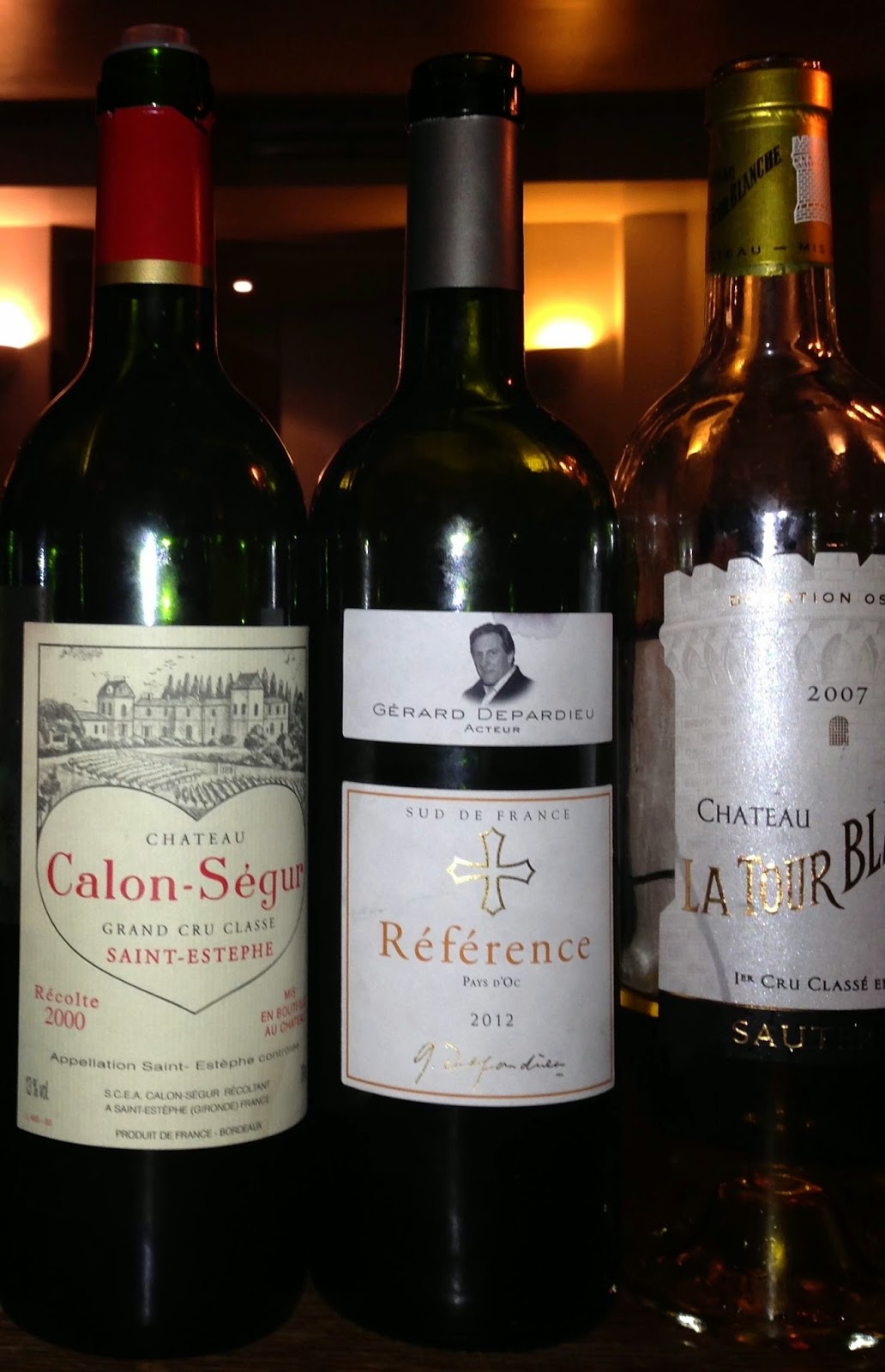 And so to the last wine of a fun evening - La Tour Blanche 2007 - just lovely, drinking well, an estate I really like (their 2014 is great) and who never go for power over focussed drive in my opinion. At this age it would work just as well before dinner as after it…

A lot of fun…next team outing will be part two of this...BBQ Chez Duvault Blochet
Posted by Will Hargrove at 09:40