I was delighted to get an invite from the UK agents for Gaja to a lunch at my Favourite Zucca. The format was a good one given that Gaia Gaja, Angelo's daughter, was in town sadly with very limited time. She came for a session pre-lunch and talked through the 2011's before also talking through the wines we were to have with lunch. 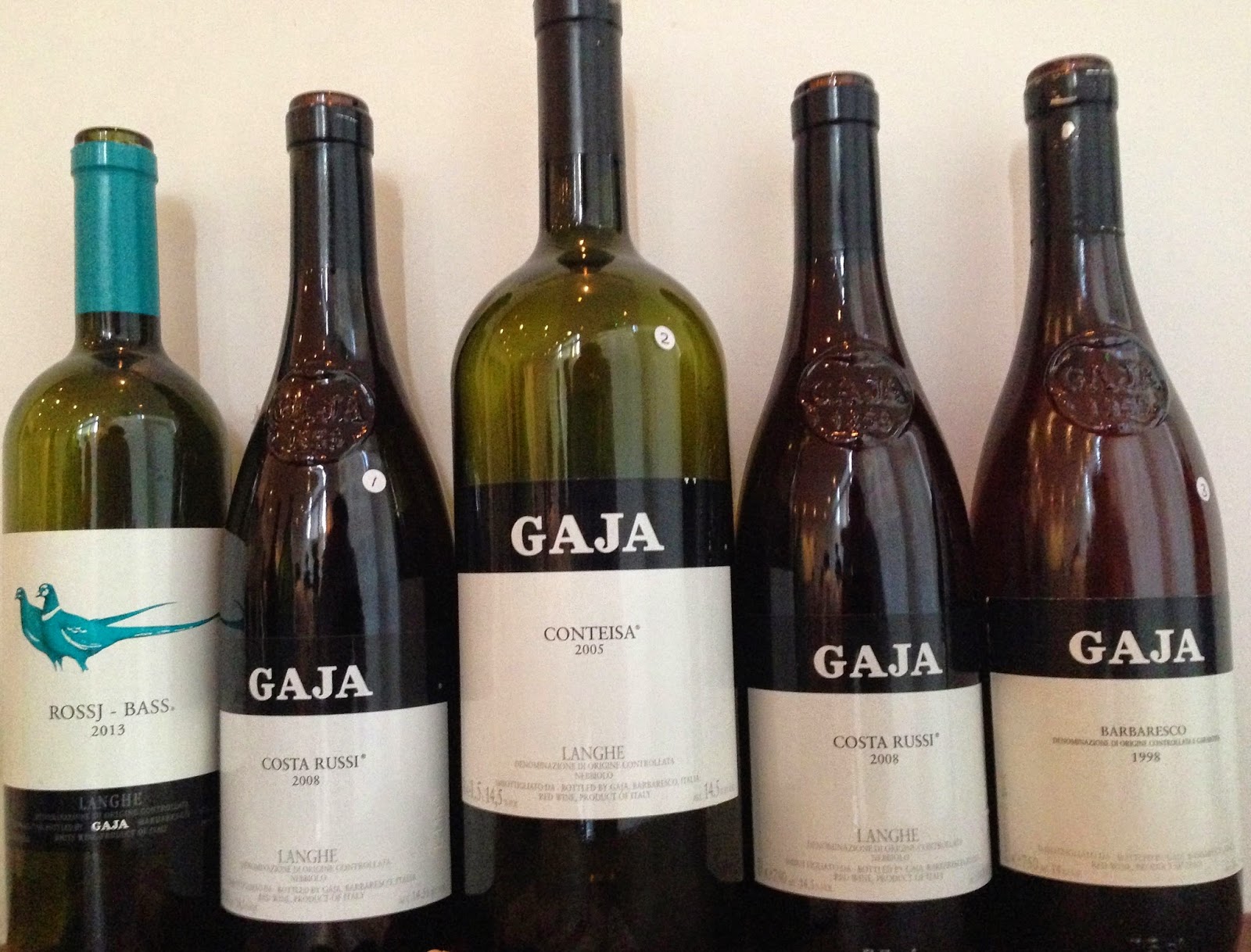 She is a very good and engaging host who does a very good job saying what must be similar things almost day in day out, you don't get that feeling and that is quite a skill. She had a few good sound bites, all delivered in a cheeky fashion, my favourite of which was "Nebbiolo - the variety the french don't have".

On a more serious note I have had a fair few Gaja's down the years and always found them to deliver, possibly more in a solid way than a charming one but that is down probably more to my bias towards traditional Barolo and Barbaresco than anything. The wines that the family make are good to very good and certainly you can't claim to have explored Piedmont and it's brilliance (bias again) without spending considerable time on these wines.

Before the tasting Gaia spoke a little about 2014. A vintage with a cool June, warm July and then very cool August (average 17 degrees) before a better September/October. Severe green harvesting was needed if what was to be picked would be ripe. It was a year where Gaja saw production in Barolo down by 40% and Barbaresco down by 20%.

When talking of 2011 Gaia mentioned that if was a decent year, better in Barbaresco than Barolo (which is still in concrete). Simpler to 2010 in having an elegant/lighter body...

Barbaresco 2011
Bold tannins but not too much so. Lovely nose, clean, saline with cherry fruit then other red fruits, roots and rhubarb, some lovely sweetness. A blend of 14 different vineyards sites. Impressive.

Costa Russi 2011
The last site to flower and the last to be picked. It is a site that has less humidity and is cooler with a more compact soil. I found this denser, darker and creamier with more texture, a little more wood does show but there is again a little saline, bold and lovely if obviously youthful.

Sori Tildin 2011
Gaia suggested that the addition of a little Barbera is a little like a little Merlot with the Cabernet in Bordeaux. This site is a little sandier and nearer the top of the hill. I found more spice, a deeper wine but not darker than the Costa Russi, more tannin, it took a little while to open in the glass. There was a bell-pepper lift to the wine that I liked. Very good.

We then re-visited the white that we were served on arrival:


Rossj Bass 2013
A blend of 95% Chardonnay and 5% Sauvignon Blanc this wine is named after Angelo Gaja's youngest daughter Rossana. The grapes come from three sites planted in 1986: The Rossj and Bass vineyards in Barbaresco and a small vineyard in Serralunga. It is a wine I have enjoyed before. Ripe lemon and lime fruit combine with a small dash of toastiness. The fruit character is a little like a generous Chablis as there is real minerality. I like this! They so also make another serious white Gaia and Rey which is 100% Chardonnay and requires more time.

We then moved on to the, as ever, immaculate food:


Barbaresco 1998
Thus had a slightly rancio nose, iron and resin this was a good drink but not up to Sori San Lorenzo 1998 served even more recently. There is a very true ferrous and iron-like character and with food this is good. Fully mature I would argue best drunk now.

Conteisa 2005 Magnum
Conteisa is a Barolo (with Barbera) in the same way that CR or SSL are Barbaresco. From a site in the Cerequio vineyard in the La Morra sub-district. Very good, nicely done in a sometimes tricky vintage, quite bold and dark but not without freshness, impressed.

Costa Russi 2008
I really like the 2008 vintage in Piedmont and I think it'll prove a savvy buy for many in years to come. The 2004/2006/2010 vintages are spectacular but the 2008 is a little more feminine and I expect the drinking windows to be massively wide. This wine was true to my words, not overly big of rich but in a lovely balance that I think will stand it in good stead.

A cracking lunch - Will and Adam - thank you...and Gaia of course!
Posted by Will Hargrove at 05:06