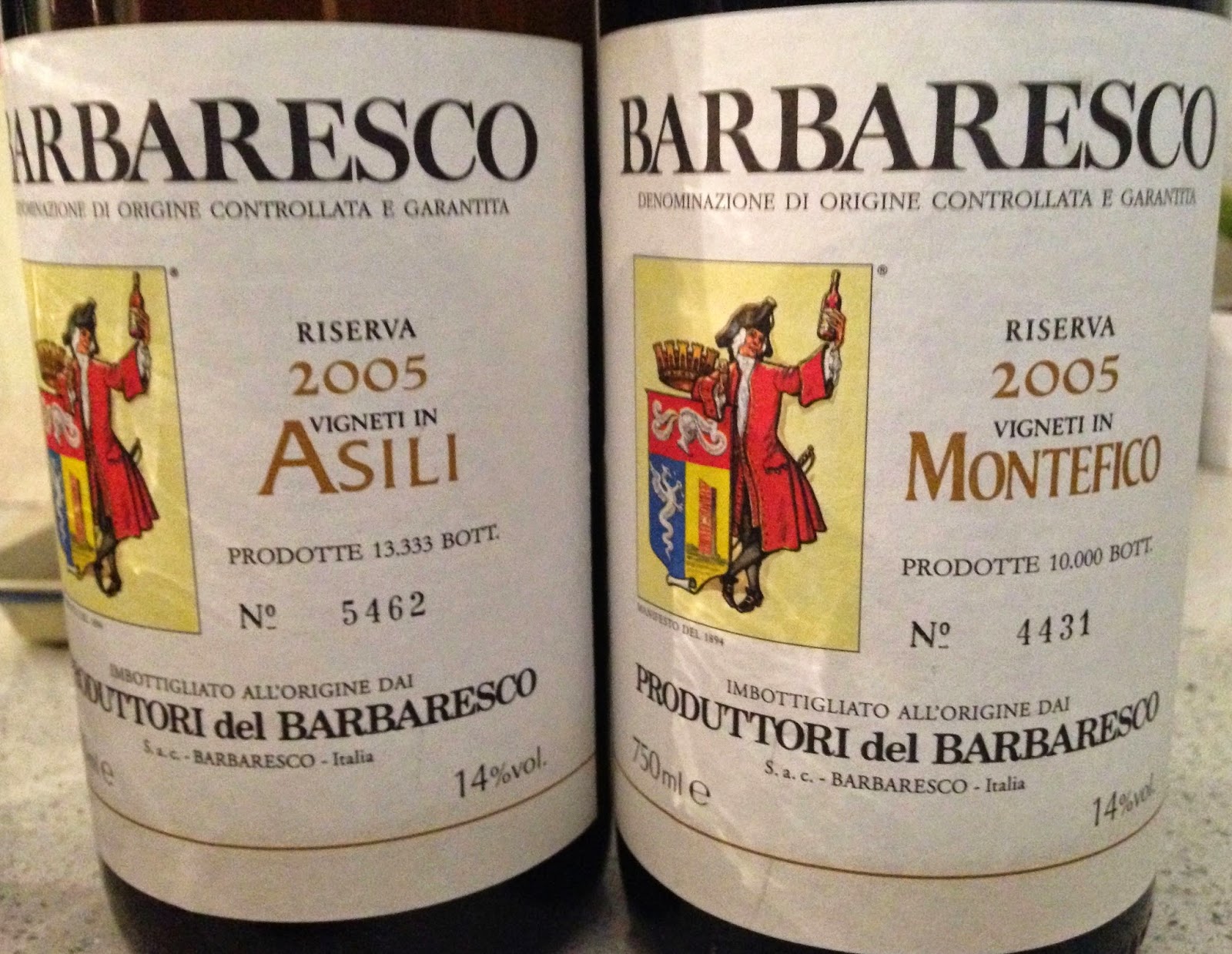 On friday a couple of weeks ago I got home and thought what to drink? I quite like opening a few things on friday night that I know will be interesting to follow though the weekend and watch them evolve. The fact I have a newly installed and filled Eurocave means that I will probably do this more and more.

I eyed up the possibility of different Brunate 2007's but settled on a look at two of the single Cru Barbarescos from Produttori del Barbaresco - Montefico and Asili. In my eyes, and many others, the greatest co-operative of them all. Some years they just make one Barbaresco and one Langhe Nebbiolo but in good years they release the single vineyards as well (9 of them). There is never a middle ground it is either all 9 single Crus or just the Barbaresco. With a run of excitingly good Piedmont vintages (you shouldn't group Barbaresco and Barolo as one but lazily I am) there is a danger that 2005 is forgotten.

So the format: Both bottles came straight from the Eurocave at 12 degrees and where double decanted at 6.30pm on the friday. From there the wines were sampled alongside each other several times of the weekend and re-corked after each sampling. Essentially a slow oxidation was facilitated.

The Two sites both have 3 growers whose wines go into them:

Friday 7pm - first taste
Montefico - Cherry, berry fruit, rich but with pure violets, grip comes to the fore then, fresh and moreish, impressed.
Asili - Darker fruit than Montefico, deeper, but then a savoury saline airyness. Steel and salt, very "grown up". Taut and closed on the palate. Such a quintessential Nebbiolo nose.

Saturday 5-7 pm
Montefico - Cheery and stoney salt shows more, has opened up well, became quite lush.
Asili - More bruised fruit, an edge of degraded dark fruit and some leather, quite open at this point, almost decadent.


Sunday 6pm
Level in the bottles was very low from saturday evening so there had been a fair degree of oxidation.
Montefico - quite browned off fruit but still mellow and enjoyable.
Asili - Still a defined nose, impressive, tannin does then show through. Balanced

So, my conclusion:
Both good and show lovely Barbaresco Nebbiolo characters exactly what you would want. The Asili is just a shade more refined and regal, very very impressive indeed, the saline edge just adds a little. The Montefico comes across as a warmer spot and a little looser but that is picking holes - it is still lovely.