Friday before last we had Olivier Leflaive and Franck Grux in town to show the unfinished, but about to be released, 2013's. The 2013 vintage is "small again", not as much work as the  2012's possibly but a poor spring and then a long growing season. For the first time since 1984 Franck said a fair amount of the harvest was in October. Franck said he "prefers the acidity of the 2013 to the 2012" 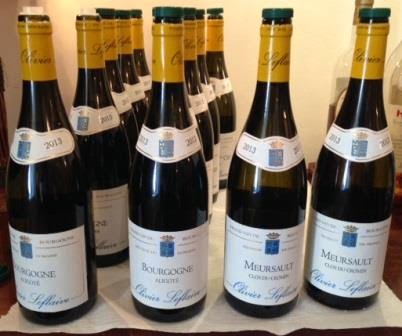 So to the wines:

Auxey-Duresses La Macabre 2013
Quite like the Montagny but less warmth, more minerality and a dash of Islay peat with a touch of Saline. A high-toned apple freshness on palate. Quite serious…16.5

St.Aubin 1er Cru Dents de Chien 2013
Delicious nose, has a lot of class. A dash of reduction, lovely opulence within a framework, is generous and expressive, nice work...17-17.5

Meursault Clos de Cromin 2013
(Not racked yet) Tiny bit of almost licorice on the nose that goes with any air. Has an austere nose, then a generous palate of roundness and a good dose of yellow fruits, a dash of sweetness on the finish…16.5

Chassagne-Montrachet Blanchots 2013
Near to Granc Cru "Criots". Ripe green fruit character, a dash of spice, nice and so different to Les Meix...best I can remember from here…17.5

Chassagne-Montrachet 1er Cru Abbaye de Morgeots 2013
Very complete, may be a shade muted on palate, very ive indeed, balanced, has good potential...not may be showing the most just now. 18.

A very good tasting, it'll be great to do the same in time with the finished wines. Always great to see Olivier and Franck! 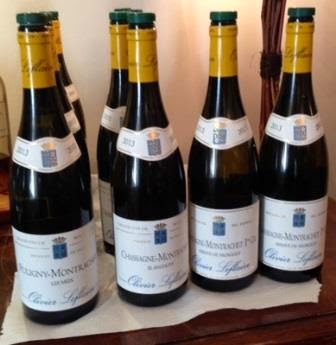