Some cracking bottles and stunning food - Alyn Williams at The Westbury...

A lunch that grew in number from a catch up for two to a feast for five. Great fun with very like-minded wine lovers in the trade. All wines served blind except the Champagnes (apologies for no photos of the wines). Food was from the tasting menu at Alyn William @ The Westbury - if you like seriously good food then go! 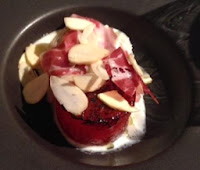 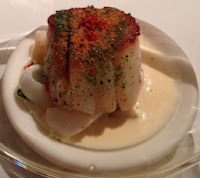 Pol Roger 2002 opened the proceedings in style. Opulent but in check, quite rich, it is perfect from now on. The food came thick and fast - Crab, miso and pepper - starting us off as we moved to the Pavillon Blanc 2005 which if I'm honest was a little strange. There was a character on the nose that was familiar to white Bordeaux and I nearly went there with my "guess" but I eventually decided that the nutty, savoury finish meant it was a White Rioja with age on it. Clearly I was wrong but there you go. The bottle was in no way faulty but it did, as the chap who brought it said, match the other he has had...bit of a mystery I'd love to know if you have had a similar experience? The next course was delicious - Orkney scallop, cucumber, muscatel and scallop broth - and went well with Bienvenues-Batard-Montrachet Garnd Cru 2007, Leflaive. I adore Bienvenues Batard from Leflaive the 1999 being one of the greatest white wines I have ever had. This 2007 was quite open, not problematically so, but had a real, almost Meursault-like richness. The acidity is there and the overall wine is enjoyable but just a shade underwhelming on this showing. 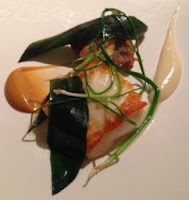 The next course was an amazing combo, I almost wanted the watermelon bit to fail but not a chance it's a stunner - Burrata, Iberico ham, watermelon and cobnuts. We were now into a pair of very good 1er Cru red Burgundies, I think we all agreed the quality was pushing for Grand cru. The first - Vosne Romanee 1er Cru Petit Monts 2010, George Noellat - was fascinating to have blind as we would not have gone for 2010, I went for 2007 Grand Cru. Very fruited and extrovert, beautiful clean deep red fruits. It had been opened but not decanted in the morning at about 10am. The producer has holding in other 1er Crus in Vosne and also both Echezeaux and Grands Echezeaux, very much one to watch, a delicious wine. Another stunning course arrived - Turbot, cepes, garlic and sea aster - really great food, perfect balance. The wine up now was my bottle - La Forge de Tart 1er Cru Morey Saint Denis 2007 from Clos de Tart. It showed brilliantly which was very pleasing. Very clean and a little decadent, made a beautiful pair with the Noellat. Makes you realise that much as mature red Burgundy is wonderful it is a mistake not to also drink these wines when they are young. The others got near to the wine quickly but then I tried to help by saying it was a 1er Cru made from entirely Grand Cru fruit and not produced every year, that made it harder not easier. There was no La Forge in 2009 or 2010. 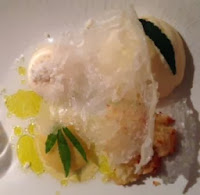 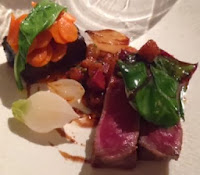 We moved onto the true "red wine food" now with a lovely dish of Wild Mallard, Williams pear, cavolo nero, chestnuts and cider. The next wine did a good job of fooling us all. It was Cote Rotie La Mouline 2004, Guigal and the main reason it fooled me was that I always think of oak with these wines but this was a gorgeous expression of fruit, red and black with a dash of spice but a lovely medium weight. No attempt at all to wrestle with you just charming balance and this after nothing more than a very brief decant. Really wonderfully handled wine from an under-rated Rhone vintage. I didn't even bother picking a dish of the day but if I had this next one would have been a contender - Devon Ruby red Sirloin and cheek with turnips and croutons. The flavour and quality of the fat was exquisite. The last pair of reds were served side by side and after a lot of time was spent (by us not the restaurant!) muddling our glasses up we got things organised. The Ornellaia 2001 impressed with the fruit balancing the savoury elements well, there is no rush at all with this wine but if you have some I would start now as it is in a lovely place. The other red was Ridge Montebello 2003 and it did not disappoint. Just enough extrovert fruit but all in that poised balance that the estate seems to just manage over an over again, medium body at most.
A couple of puddings followed the first Cornish Cheescake, chasselas grape, oats and seeds really hitting the spot before the second was not quite my thing - Lemon, Gin and Marigold. We had one last bottle with these and it was a very serious Bollinger Grand Anne 2002. Somehow I have not had this before. It was very, very good. Lovely tight structure and very vinous, impressive and a keeper for sure.
In short, a brilliant lunch with so much good (and bad) chat and amazing food!