It has taken me a over a week to write up what was a brilliant evening of food and wine with friends on the last friday night in August. There was a slight feel that this was the last hurrah before proper work starts with the arrival of September, we certainly enjoyed ourselves.

A staggering menu was put together Zucca's Chef/owner Sam Harris and executed on night by Simon:

Broccoli, Squid and Pepper fritti
Antipasti
Tuna involtini, Cripsy Cavolo
Cauliflower, broad beans and hazelnuts
Mozzarella, speck and figs
Beef carpaccio, beetroot
Primi
Agnolotti in brodo
Vitello lasagne
Taglierini, rabbit ragu
Secondi
Grouse, trompette and pea shoots
Formaggio
Toma, pecorino sardo and gorgonzola dolce
Dolci
Pistachio tart, raspberry ripple ice cream
I have put pictures of a few of the courses at the bottom of this entry. There is no point me even trying to pick a favourite dish, they were all genuinely great in their own way.

Moving to the Wines the co-ordination had taken place before hand. The selection was a brilliantly balance and worked superbly with the food. Just one of those occasions when things clicked. 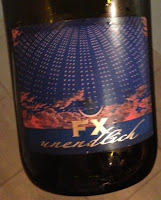 Perle 2006 from Ferrari kicked us off, 100% Chardonnay and focussed with a little toastiness, very balanced and just right as a palate primer. The second sparkler was a perfect foil for the Perle, Henriot Cuvee des Enchanteleurs 1998 was richer more dense, more serious, not over the top but with a sturdy core. The 1988 as a Pinot vintage is a bit of a star just as 1999 is for Blanc de Blancs, this was really good, serious, a Meursault-esque Champagne.
A magnum of Riesling Unendlich 2000 from FX Pichler was up next which had a lovely oiliness and a petrolly nose but stopped short of being Kerosine-like. It went with the Tuna and crab brilliantly and added to the very good impression I have of this producer from a bottle a few blogs back, I am not good on Austria but obviously should put in some work here!

Cervaro della Sala 2010 from magnum had a very well balanced nose with savoury toastiness but enough fruit, if it had been served blind I would have been tempted to say classily Californian it was really good and certainly not too young to drink though obviously has some legs. The third dry white was Corton-Charlemagne 1987, Bonneau du Martray, we managed to get though three bottles of this, two at this stage of proceedings and then another at cheese time. It's a cracking wine that confounds the lack of faith in white Burgundy but then the problems seem to be 1996 and onwards generally. It is everything you could expect from a difficult vintage but showed very well with a nutty unctuousness balanced by mineral vibrancy. All three bottles were identical.

The first of the reds was also a Burgundy, Chambolle-Musigny 1976 from Bouchard. This had a flinty, graphite like minerality on the nose which left after a minute or two in the glass then there was just a mass of dark fruit, kirsch and headiness, it was as though it was under screw cap, somehow lost in time. The fruit might have mellowed a little but there wasn't really much development or degradation to be seen, incredibly, a difficult vintage if for the opposite reasons to 1987, the 1976 vintage was hot, very hot and dry. With this brilliant "time capsule" tasted it was time for a truly tremendous run of eight Italians. There was a general pattern of Tuscany then Piedmont but as you'll see it changed towards the end.

Chianti Classico Riserva Vigna del Sorbo 1997, Fontodi was very pretty, in great shape, showing more refinement than many 1997's. Tignanello 1993 in magnum was delicious, mellow, totally ready and just one of those wines you love to drink without having to think too much, in bottle format I would imagine it may be fading but not in magnum.
Sassicaia 2000 also from magnum, was really delicious, sometimes in youth Sassicaia comes across to me as almost too serious and too savoury but this has found a lovely spot, it has that trademark bell pepper and savoury bite but the structure had just eased a tad to allow the wine to soften and become seriously inviting. Clearly this has years ahead of it but is lovely now. 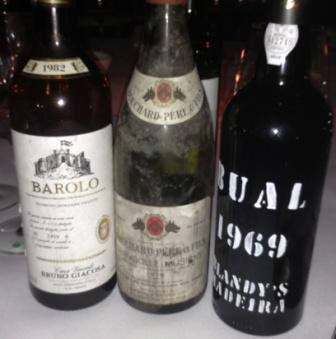 Nebbiolo now took over with several rarities in the mix. First up was a lovely magnum of Barolo 1988 from Bartolo Mascarello which was a joy, slightly herbal, bricky, mellowing nicely. The structure has eased a little, I had this in bottle 5 or 6 years ago and as you'd expect this is tighter and arguably a little classier...delicious.

Two bottles of Barolo Riserva Voghera Brea 2000 from Azelia followed and showed a very different style of Nebbiolo, more richness and more toffeed notes, less class but then Bartolo is hard for anyone to live with. Azelia is a producer I should learn to know better.
Barolo Villero 1982 from Giacosa was next and for any lover of Piedmont there is something about the Giacosa wines from the 80's that is simply unmissable. An incredible balance is found between extreme elegance on the one hand and a persistent almost powerful guts on the other, it really doesn't get much better and especially when you are talking about a vintage that, for the top producers, is drinking brilliantly now. A tasting note is pretty pointless here.
A quick look back into tuscany now followed with Montevertine 1999, my notes are brief here but say; lovely rich fruit. I remember thinking it was young but at a great stage. One final red was left and Barbaresco Gallina di Neive 1985, Giacosa was an incredible note on which to finish the reds, what I said above about Giacosa from the 80's followed through well, this was a joy, I wouldn't dream to trying to say which I preferred of the two Giacosa's as that would harm both. There was deep fruit, black fruit almost, cherry too and then a lovely saline grip with the structure, obviously hitting fourth gear with fifth to follow soon, incredibly good.

The final bottle was the oldest of the night but in many ways was possibly the youngest tasting in comparison to its age. Bual Madeira 1969 from Blandy was exceptional, I love Madeira, this had walnuts, dates, Christmas cake and a whole load of power, sweet brown fruit character, one glass could have lasted for ages and the value in bottles of these is that you can drink almost a "dram" a night and just have the most fascinating complexity several times over...I need to get some.
Well, there we are then, a brilliant dinner that regardless of what the autumn has to hold will be one of the dinners of the year, great food, great wine, great chat... 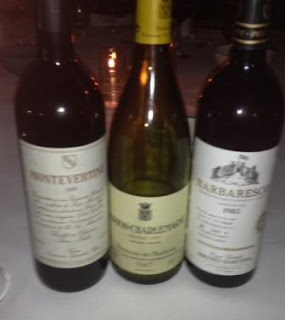