Italian Wine night at Zucca (Just for a change)

Last week saw a gathering of a few wine trade friends with Mr Sabourin orchestrating the wines everyone brought and Mr Harris (proprietor of Zucca) making sure we had a brilliant menu, expertly cooked and assembled by Chef Megan. So to get up and running we had a delicious bottle of Perle 2004, Ferrari which sees 4 years on the lees and is right up there amongst the best of sparkling wines, it was still youthful but a great wine to get the juices flowing for food.
Next on show was my offering for the evening, a pair of Meursault's from a producer I feel is a little under appreciated - Thierry Matrot - you will see Thierry et Pascale and also Joseph or Pierre Matrot on bottles but it is all one estate run my Thierry and Pascale, with the next generation involved too. New oak use is very low (max 25%) and the wines age brilliantly. Interestingly on this evening the Meursault Charmes 1er Cru 2008 seemed to out perform the Meursault Perrieres 1er Cru 2008. Both were good and a couple of our party "argued" that the Perrieres was getting better and better. The Charmes just seemed to have a little edge in the refinement stakes, either way a good pair.

Moving away from Burgundy, briefly, was a richly fruited but now almost dry bottle of complex and unctuous Hattenheimer Pfaffenberg Riesling Spatlese 1989 Auktion wine, Schloss Schonborn, amazing depth of flavour and development, brilliant, a real wine of texture and supreme length.I must get more Rhinegau wine into my cellar. With quite a bit more fish to come, including the best Tuna I have ever had, Sam then kindly decided a bottle of Puligny Montrachet Folatieres 1er Cru 2005, Leflaive would be a good idea, how right he was. Having had the very same wine but 2 months ago at home (here) again with Eric and Sam (it was Sam's bottle then too) this was going to be interesting. The one in November was good, rich, yeasty more Meursaultesque, this bottle was "electrically" Puligny, a rapier to the taste buds, not showing 8 years at all, a dash of reduction (I like that!) and such a balance of beautiful fruit with great acidity, stunning. 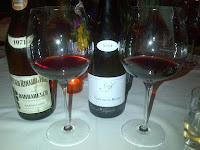 Keeping with the idea of wine in pairs we then had a fascinating combo, two wines 30 years apart but with many similarities - Barbaresco 1971, Francesco Rinaldi & Clos de la Roche 2001, Hubert Lignier. The parallels between Burgundy and Barbaresco/Barolo are often talked about, the importance of site/terroir, one grape variety, oak use, long-lived refined wines etc. This pairing showed the similarities and may be differences amazingly well. The Barbaresco held a great colour and fruited nose there was no way it was 42 years of age. The structure was elegant too, no hard edges. F.Rinaldi also made a great barolo in 1971. The Clos de la Roche had some intensity but a gorgeous purity of red/black fruit, real freshness and elegance but with a backbone, I love the 2001 reds and this is no exception, a long life ahead as it had little development yet.

The next wine was rightly served alone and has to go down as one of the most significantly memorable I have had - Barolo Riserva Especiale “Mussolini” 1937 - the Mussolin part is because of the ‘Vini di Regime’ slip label that identifies this as being for the leader himself and from his cellar. With 1937 not being a vintage of any great note, a glimpse at the wine and the beauty of the bottle was enough but the wine itself actually was amazing, it took a few moments to come out of itself and then it was elegant floral salty wine of complexity, the most amazing feature being that after 25-30 minutes in glass it was becoming more expressive and floral the opposite of a wine that shows a little and then dies...a unique moment.

A brace of reds from one of the great vintages, 1964, was next - Barolo Riserva 1964, Guiseppe Mascarello & Barolo Riserva Speciale 1964, Giacosa - they were delicious and especially so with the Lamb. As a weird coincidence I had the Mascarello about 2 weeks previously (see here) and the bottle on this evening was far superior, very elegant, that classical roses and tar profile but so elegantly fresh, a light rosy colour with little development on the rim. The Giacosa got a slightly luke warm response from Eric but I enjoyed it very much for its contrast to the style of the Mascarello, far more earthy, more masculine, a little grittier and harder but then that countered the other wine well.

The black treacle tart with salt was well matched to the glasses of Vigna del Volta 2008 Emilia, Malvasia Passito and the meal was done, stunning food amazing wines and a lot of laughs...many of which seemed to be reserved for my gold braces...they ain't seen nuffink yet!!
Posted by Will Hargrove at 07:19