Until yesterday one of the great omissions from my "smoking career", for want of a better expression, was the fact that I had never had a Montecristo No2. The Monte Pyramid you could say is something of an icon in the cigar world, to have not had one was akin to not having tried Mouton Rothschild. Nobody tries to say that either of these great names are the out and out best but they are both well know and pretty dam useful at what they do. Being a bit of a geek on the cigar front I have always liked the old classics and the interesting new smokes rather than the cliché of something like a Monte 2. This may be a similar reason to why Cohiba cigars, good thought they are, are never number one on my priority list. I have also found Montecristo at times hard to love, they can be quite variable, largely due to the vast production and sometimes I find them a little one dimensional. The "flavour" on those occasions being towards a harsh dark chocolate.

This however, could not have been more different and is right up there with the very best cigars of the year so far. Lovely construction, a sheen to the wrapper and a good aroma before lighting. Once it was lit it produced a wonderful amount of rich smoke, a perfect draw without ever becoming hot or harsh. One of the things I have observed about a great cigar is that you don't need to drink with it, the vast majority of even good smokes will leave you a little thirsty or looking for a touch of liquid refreshment but such was the balance and rich elegance of this that I barely noticed I was not drinking the glass of Domaine de Saissac Cab Sauv 2010 that I had with me. The harmony and balance of the cigar made it hard to define any over powering flavours. The body was solidly medium, there was a touch of leather but not too much, some sweetness and a tiny bit of chocolate but more milk than dark. A really great smoke, easily a 95.

The previous day I had another first, a Hoyo de Monterrey Epicure Especial while watching the guys up a Finchley RFC play a pre-season friendly. It is my first year not playing rugby (too many concussions, which explains a lot) and I am going to find it hard to watch. Back to the cigar, I am a fan of the Epicure No1 from Hoyo as I love the size (Corona Gorda) and find it a graceful elegant light to medium bodied smoke. I also like the Epicure 2 (Robusto) when they are "on form". The Epicure Especial has, as far as I am concerned, one plus point and one negative. On the positive it is true to the Hoyo marque, a good elegant just-under-medium bodied blend, perfect for mid-afternoon while having a beer or at the races/golf. The negative is that I don't really see the point of this size in amongst the Hoyo range. It is a little longer than an Epi 2 and a little wider than and Epi 1 but why wouldn't Habanos just want to make the very best Epi 1's & 2's? I have no issue with them making it but just don't understand why they do. A little like the, soon to be discontinued, Trinidad's Robusto T and Robusto extra...you just don't need both. As a cigar this was a good if not exciting 90.
I have recently re-started enjoying a few different beers and grabbed the two below for a comparison. The Meantime IPA was delicious, fruity, fresh, not too yeasty and at 4.6% a good bottle I would have again. The Brewdog Punk IPA was a headier richer and more animal beer, the 5.6% helping here, more of an every now and then bottle but well worth trying. Might try them with a cigar next time! 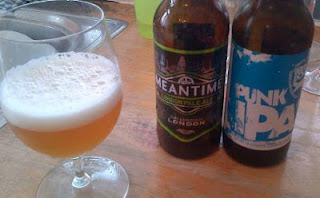