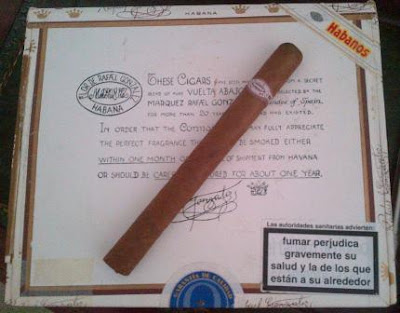 There are a couple of blogs coming up that relate to Cigars either smoked in or bought from Spain. The first is about this Rafael Gonzalez Lonsdale with box code PUC ENE 02 meaning it is from 2002. I bought it at Gimeno in Barcelona on a trip back in June and smoked it yesterday. I saw that the shop, which is well worth a visit, had two of these particular sticks. The Lonsdale is a size (42x165) that I really like. I find myself increasingly drawn to the elegantly longer yet not thicker sticks. After a cracking roast lamb at the in-laws it was home to have a last afternoon before returning to work after a holiday in Spain (full Cigar blog of that to follow). When I say above that I like this size it does not appear that Habanos SA who run the Cuban Cigar industry agree as this particular size of Rafael Gonzalez was discontinued in 2006.
Appearance and construction: Firm to the touch but a decent smooth wrapper, very light aroma when cold.
Opening: It lit very easily and regularly with a gorgeous soft aroma. It was mellow to begin with hay and straw notes and a tiny dash of milky mocha, there was nothing forced about this smoke, very refined and relaxed, perfect afternoon fare.
Middle Third: Consistent with the opening with a little more savoury character, again hay and straw but above everything else it is balanced and integrated, no harsh edges but not boring. Mellow tobacco and hard to describe but impressive. Lovely white ash.
Final Third: Burn issues sadly, a little tight and the decent mellow profile continued but I let it rest an inch earlier than was ideal...
Overall: A delicious gentle, elegant smoke that was not taxing but complex enough, very well-knit, really enjoyable and very true to the Rafael Gonzalez marque. I would score it 91/100 but feel a perfectly constructed example would have been 93-94. A real shame that these are no longer available as I would buy a box if they were.
Posted by Will Hargrove at 09:15