Last night I was very kindly asked to a "50 years of Grands Echezeaux, DRC" dinner at Christies in conjuction with Linden Wilkie's Fine Wine Experience. The setting was the directors dining room, the food hearty and well chosen so as not to overshadow the wines but compliment them. Duck, Mushroom Risotto, Beef and finally Cheese. The bottles had been double decanted (younger wines only) and all sourced in Europe. Many from the UK agent (who I work for so watch out for bias). The wines were all at a perfect "cool" temperature and served in flights as shown by the lines below.
All wines (except 1989) where true examples. All showed well. The "assembled" felt that the balance and lightness of touch was excellent. The vintage shone through well and everyone loved the fact there appeared to be little or no effort for there to be a “house style”. My scores reflect my thoughts on the bottles on the evening, those in brackets are what I have guessed at as a potential final achievement. I was very impressed by the range as a whole. This is the first vertical tasting of anything like this scale that I have done with the DRC wines. So on with the tasting notes and observations.

2008 Crunchy red fruit, ginger and a dash of white pepper, a lightness of touch, vibrant colour, redcurrant and cranberry in there, will be serious now it is enticing, good refined grip at the end, long. 18 (19)
2006 More dense than 2008, deeper darker fruits, more black than red, a sleeper? Less spice than 2008, more brooding, the overriding impression is of depth and complexity to come. A fascinating future. More in the mould of 2000 or 2002 than 2008 or 2001. 17.5 (18)
2005 Like a two year old colt that you know will be a great three year old, one to leave and let develop. This wine is a little closed on the nose but the palate and the texture says it all, depth and precision at the same time, very fine. 18.5 (19)
------------
2002 Very typical and just as expected, very 2002, a dash of degradation, developed, a wine that will open out in time, a touch of cheesecloth, bruised fruit, good acidity, profound rather than pretty, very masculine. 18 (18.5)
2001 Refined, poised, focused and rapier like, a softer 2008? Feminine and balanced very pure red fruits but depth too. Very complete and as typical of 2001 as the 2002 is of that vintage. 18.5
2000 A little more spread-out on the palate, reveals it character now, open and expressive, mushroom development and little good decay, a drinker for the hedonist. 17
------------
1999 Very much a class act, that slightly cheesecloth nose but so much depth and focus, lots of fruit, rich but so weightless at the same time, velvety texture without being simple and too easy a very fine wine, appreciable now but with masses to give. 18.5 (19)
1998 Loose-knit, a little evolved, decent fruit, grip a little marked, good but no more. 17
1995 Fresh red fruit and considerable poise, at the crossroads between young and mature. 18
1991 Simply delicious, multi-faceted fruit, red, black and in between, silken texture but grip too, at the beginning of what I think will be a long peak, harmonious to the very end, long and very fine. 19
-------------
1989 Colour was good, nose acetic and very “funky”, waited for that to “blow off” but it didn’t. A strange bottle. No score.
1988 A developed and mature example, mushroom and chestnuts on the nose, sweetness of fruit still there. Good now, fully mature to my mind.18
1969 A fully mature wine. Still with life, colour now pale. Fruit was there but in the background. Tertiary aromas prevalent but still elegant, enjoyable and very interesting but not for the longer term. 18
1959 A great wine and I could see elements of the 1991 about this wine. It is mature but still only secondary in aromas, my note says “like a 21yr old who has lived a lot”, there was an almost caramel edge on the very tipoff the tonue and after time in the glass a little delicate coffee two, very impressive and not in decline. 19

A really wonderful tasting and one I feel sure I will never repeat. 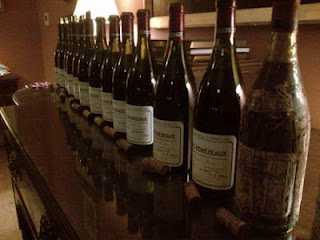