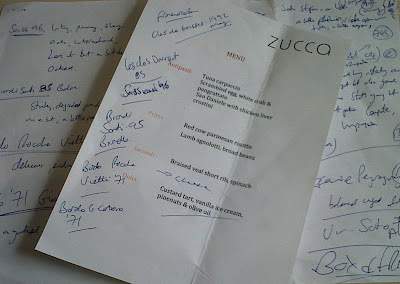 On Wednesday this week I was delighted to join eight other wine merchants/traders/friends and Sam Harris, restaurateur and fellow Piedmont fan in the private room at Sam's Zucca Restaurant in Bernmondsey Street. I can't take any credit for organising this at all. Although comments from others that I "live" in Zucca are only a slight exaggeration. The theme was initially set as Barolo but it was loosened up a bit which was a good thing.

To kick things off we had a couple of bottles of Franciacorta from Ca del Bosco I had never had it before and very much enjoyed it, a creamy lemon flavour with a rich texture was the over-riding impression. As we then sat down to Artichoke Fritti we had a cracking magnum of Clos de Goisses 1992, Philiponnat it was taut but generous at the same time, nicely evolved but still approaching its peak I would say, the best 1992 Champagne I have had. We started the three antipasti with a delicious Tuna Carpaccio with small bits of chilli with another magnum, this time Chablis Grand Cru Les Clos 2005, Dauvissat, embarrassingly this is the first Dauvissat I have ever had, it was very impressive, at a cracking stage in its development, as with great Chablis it is a wine of minerality and texture more than fruit, really great drinking, could have done a bottle myself no probs. Scrambled Egg, white crab & panagratto was up next and this dish was one of the very best of a great bunch, the textures from the crab and panagratto worked superbly with the eggs (from Italy), one of the gathering wants to have it for breakfast every day from now on!! On the wine front we were now onto a pair of Tuscans - Brunello di Montalcino 1985, Biondi Santi & Sassicaia 1996 with San Daniele with Chicken liver and Crostini - The Brunello was interesting and very Sangiovese but slightly on the way down, balanced and fine but no more. The Sassicaia was one I had not had before, I know the 1995 (quite light) and the 1998 (great stuff) quite well. This 1996 was still primary, a young Cabernet nose, a good mellowing structure and medium in weight, I really enjoyed it and if I had some I would wait another 3-4 years, delicious though it is now.

Of the next nine reds, eight were Nebbiolo, always a good thing in my book. First up a pair of 1971's - Barolo Rocche 1971, Vietti & Barolo 1971, Giacomo  Conterno with a stunning Red Cow Pamesan Risotto (god I hope this makes it onto the regular menu). The Vietti was good for two reasons, firstly whilst fully mature it was balanced, complex and showed that before the oak-fest that hit Vietti in the 1990's there was a more traditional edge to the wines. Secondly because this very wine had been the only corked bottle in a tasting of 1971's a few year ago  http://duvaultblochet.blogspot.co.uk/2010/03/barolo-1971.html. The Conterno was more youthful by comparison, good too but may be not the most perfect bottle, delicious over all but the palate out performed the nose. The next two bottles were short of the same wine 40 years apart and were my contribution, the first being a gift from a friend, they were Barolo 1967, Giacomo Conterno & Barolo Cascina Francia 2007, Giacomo Conterno, the reason I say sort of is that the estate bought the Cascina Francia vineyard in 1974 so the 1967 will have been from fruit sourced around Serralunga. Both were served with Lamb Agnoloti and broad beans a fresh dish with beautiful green bean flavours and textured up against the light pasta parcels. The 1967 seemed to get several "wine of the night" votes which was terrific, Roberto Conterno particularly likes the 1967 and I can see why, it has that old yet young feel, very vibrant but also fully mature, delicious and very high class. The 2007 Cascina Francia is almost a halfway house between Piedmont and Burgundy at this stage, very fresh red fruits, a lightness of touch seems to have done wonders in this hot vintage. Another first was up next - Volnay Santenots-du-Milieu 1997, Lafon - very lovely fruit, it's owner suggested it wasn't as stunning as some bottles of it he has had but I enjoyed it, red and black fruit and whilst it won't make "old bones" I enjoyed it a lot, true to Volnay but also very Lafon.

Having had our three antipasti and two Primi it was time for the main (secondi) Braised Veal Short Rib, Spinach. With this delicious dish it was time for a brace of 1989's -
Barolo Vigna del Gris 1989, Conterno-Fantino & Barbaresco Sori San Lorenzo 1989 magnum, Gaja. I have never had anything from Conterno-Fantino before but you always fall more for a wine when you hear the guy behind the label is a "character". The approach is pretty modern but there was a lightness of touch and a balance that left an overall impression of a very good wine. Gaja I guess is always controversial and in many ways it is too easy to say he is a brilliant marketeer but may be not very true to Barbaresco (or Barolo for that matter). But ultimately what happens in the glass is what matters. This was youthful in a rich way, freshness is not necessarily what you get with Gaja but you do get good well made wines, I enjoyed this for the fact that it was different, in mag it is arguably still not peaking, impressive. Sam decided, sensibly, to add an impromtu cheese course and these were served with two Bruno Giacosa magnums Barbaresco Santo Stefano 1997 & Barbaresco Asili Reserva 2004 now for any Piedmont fan this is one of the big names. You can argue, this was debated, that the wines are not now quite what they used to be but there is an elegance here that is impressive. The 1997 was a little underwhelming but then this I think is more the vintage that increasingly, throughout Italy, is not quite the blanket of perfection it has often been promoted as. I enjoyed the wine but the earth didn't move. The 2004 was undoubtedly impressive, very youthful it had a nose of strawberry, raspberry and blackberry compote, the structure was a little light but then you can get wines in such balance that they age without the structure really showing, I though this was interesting and very enjoyable, will it make old bones? We'll see but I'd like to watch and taste to see, impressive juice.

Before we move on to pudding, a quick word on the food and why I love Zucca so much - I'm going back on saturday for Mrs H's 40th - even after 3 or 4 hours eating and all these wines there was no exhaustion or loss of appetite to eat. This is because everything is so digestible with correctly simple ingredients. A few of the dinners were losing there Zucca "cherry" and they lost it with a lot of pleasure, right dodgy analogies over.

Time for Dolci - Custard Tart, vanilla ice cream, pinenuts & olive oil - I'm not a big pudding person but this was great, the pinenuts were in a brittle and the whole dish, tasted together or separately, just worked. With this we had two sweeties - Lafaurie-Peyraguey 1986 & Vin Santo 1976, Avignonese. Regular readers of the blog will know I've been very spoilt on the Sauternes front recently but even given that I enjoyed the Lafaurie, it was at a lovely stage, not over sweet or over mature, mellow and balanced. The Vin Santo was not in perfect condition but I liked it very much it had an almost milky texture which was unexpected, it had the rancho character of oxidation but I found it interesting in a "this is nearly madeira" sort of way...and so the meal was done and a massively enjoyable 4-5 hours was over. It is great evenings with friends who I guess you could call the competition but basically it just isn't like that, everyone gets along. I love the wine trade for the fact there are relatively few people who you can't put in the same room...
Posted by Will Hargrove at 01:28