Below is a blog I did for the C&B Blog, as it is my views I feel justified in repeating it here... 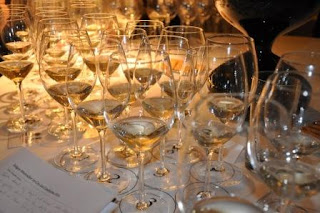 Last Thursday saw the launch of our latest exclusivity – Domaine Francois Carillon – Alison (Buchannan) has done a full offer (on C&B site) so I will not repeat that here but more give my view of the wines. The venue was Le Cerle near Sloane Square http://www.lecercle.co.uk/about.php which gave proceedings a suitably chic feel.

The evening however was a focus on the beginning of what we, in our admittedly biased way, feel is a very exciting “new” venture. I say new but the name Carillon is anything but. What is new is that with the retirement of Louis Carillon the what was Domaine Louis Carillon has become two Domaines – Domaine Francois Carillon,with which we are dealing here, and Domaine Jacques Carillon. Francois and Jacques are both Louis sons, the mind goes instantly to what must have been a family feud and arguments but actually it is the opposite just good timing and a chance to set things up for future generations. Francois and Jacques both have large families so it makes sense to divide the former Domaine now and avoid any future difficulties. The parcels have been divided up or split.

And so on to the wines which Francois and Alison presented. 2010 is the first vintage of this Domaine and all the pre-dinner wines were from this vintage the first two were Bourgogne Blanc & Saint Aubin 1er Cru Les Charmois - the Bourgogne Blanc was quite closed on the nose and in many way the least expressive of the range, this may be due to the fact it is nearest to bottling, it was fresh and with great texture just subdued on the nose almost Chabliesque, 18 months and I have no fear that this will be singing. The Saint Aubin was stunning, I love this appellation, it has richness but also a spine, it sees a tiny (12%) of new oak, there is very little produced, so little in fact that it is sold out, I didn’t buy any and regret it. Next we moved to Puligny-Montrachet having the villages first and then the 1er Cru Champs Gains. Village was a step up, it sees 1year in barrel (15% new) with lees and is from a plot at an elevation of 230metres, very impressive, the Champ Gains, first of the 1er Crus was very pretty, fine honed and with real complexity.

Have moved into 1er Cru territory we now had a trio – Folatières, Les Perrières & Les Combettes – this was fascinating, all having their champions amongst the team, rather than describe the wines with my dodgy adjectives I will give my views on their personalities. Folatieres is more of a military man broader shoulders, bold. The Perriers a more steely, almost stern but not quite, aristocrat. The Combettes is the extravagant man about town who you know under a slightly brash exterior is the kind of guy you want on your side…think I better stop this now, getting carried away. If I had to have just one it would be Combettes but I feel guilty (a good sign) saying that. Our resident Burgoholic, Tom Bird, I know would champion the Perriers to his last word…

The last pair was two Chassagne-Montrachet 1er Cru’s Les Clos Saint-Jean & Les Macherelles – I have far less experience of Chassagne than Puligny so found this an excellent opportunity. The Clos St.Jean is from a vineyard only planted in 2003 and has exquisite balance when you take the recent planting into consideration this is a wine to watch. The Macherelles was to me a step up, very expressive, crying out for food (Lobster). The whole tasting had been brilliant with the differences from one wine to another pronounced. The overall style? It is one of minerality and finesse, these are wines for the medium to long term, the lack of oak is great to see.

With dinner that followed a glass of Delamotte Champagne we had wines from Domaine Louis Carillon as there is no “Francois” pre 2010. The first course of Seared scallops, fennel tatin, baby spinach and citrus dressing we had with Puligny-Montrachet Villages 2008 & 2009, the 2008 opened up in the glass with a leesy richness developing nicely the 2009 was to my mind less complex, straight forward and delicious but I tend to find 2009 a less exciting vintage for whites than 2008 and this showed here, 2009 will be delicious from the off but 2008 I feel has the edge on potential and complexity. The next course - Roasted Veal Filet, dulce glazed salsify, carrot pulp and bok choi was served with 1er Cru Champs Gains 2008 & 2009, I look back at my notes and notice I gave 2008 18points and 2009 17-18 points, this seems correct on reflection the 2008 as with the Villages before shading things.

The final two wines with Mini tour de France cheeses were Combettes 2007 and Les Perrieres 2007, my notes had by this stage got brief but I gave Combettes 19 which is high for me, the note says “rich but fresh, great” for the Perrieres I commented “as with 2010 more taut again”, given that 2007 is a taut vintage this is not a surprise. The overall feeling was that the dinner wines were delicious but the 2010 was where the excitement lies, this may be convenient for me to say but I feel it is the truth…exciting times ahead...
Posted by Will Hargrove at 01:53