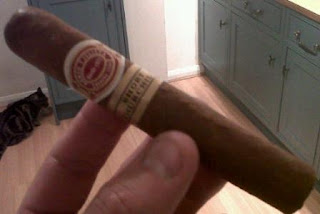 Having had a cough, cold, sore throat thingy over Christmas this is my first proper cigar review of 2012. I warmed up the prevoius night with a Paratagas Short that was as good as ever, despite being a stick that was a bit battered from being in and out of a pouch.

Anyway on with the job at hand, the R&J Short Churchill, not to be confused with the R&J Wide Churchill, which I had in Spain and loved. This had a good appearance if not exciting, mellow tobacco aroma when cold, great draw, light hay notes when tugged on pre-lighting.

Good start, nice classical richness, just under medium body, good ash. Half an inch in it had picked up a touch to medium, leather and spice, dark tea too...promising at such an early stage.
By half way the spice has calmed and it is purely a lovely balanced leather and tobacco smoke, great aroma too. The drizzle had forced me to smoke half in, half out, of the shed and I'll be doing it again as you get more of the aroma.

Into the final third I was thinking it was just really good, solid smoke. I am not sure of box code but I'd guess 2010 rather than really young. I can't see it as being a smoke to keep for ages but at this stage it is "singing" well.

Very good all in all, last third got a bit soft but I'd think seriously about getting more of these...fits between a H d M Epicure No2 and Partagas SDN4 for me...90-92 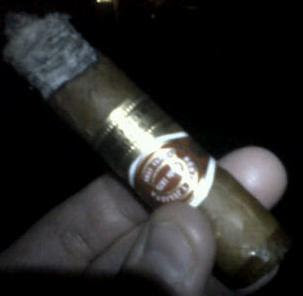